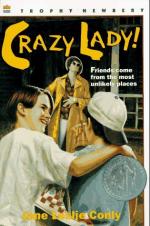 This detailed literature summary also contains Topics for Discussion and a Free Quiz on Crazy Lady! by Jane Leslie Conly.

Crazy Lady tells the story of Vernon, a boy in early adolescence struggling with family, friends and school. At first, Vernon lives like any other young boy, causing minor chaos on his block in a neighborhood of Baltimore. He laments that, as a boy in junior high, he can no longer play kids games, but remains too young to get a job like those in high school. This leaves Vernon and his friends to dismantle bicycles and hot wire cars, just to prove that they can.

Then, however, Vernon receives his first report card. Already behind one year, and big for his age, he laments the failing grades in nearly every class. At his sister's advice, Vernon goes to see the guidance counselor. When she tells Vernon that tutoring costs $2 per hour, he know his family cannot afford the expense. Since the sudden death of his mother several years before, the family gets by, but just barely, and Vernon's father already works himself to near exhaustion to provide for Vernon and his four siblings.

One day, however, a neighbor hears Vernon stand up to the local grocer, who frequently tries to overcharge customers. When she approaches him to commend the act, Vernon realizes he is talking to "the crazy lady," a single mother who lives one block over from Vernon's family. The neighborhood knows her as an eccentric, drunk, and rude woman. What's more, her son appears to be mentally retarded and attends a special school. The pair often bare the brunt of insults and jokes, even from Vernon and his friends. For reasons Vernon cannot explain, he helps the lady carry her groceries home and confesses that he is struggling in school. She promises to help. Vernon goes away from her dilapidated house, hoping none of his friends saw him at the crazy lady's house.

A few days later, Vernon receives a note from Maxine, the crazy lady, offering to introduce him to a teacher. Desperate to pass the seventh grade, Vernon goes to the meeting. Maxine introduces Vernon to her son, Robert, then to her neighbor, Miss Annie, who lives in the other side of Maxine's duplex apartment. Miss Annie's side is as neat as Maxine's is messy. Miss Annie agrees to help Vernon in English. Quickly, however, she begins to ask him to "pay" for his lessons my helping Maxine.

At first, Ronald makes Vernon very nervous, and Vernon seems to have a similar effect on Ronald. Eventually, however, the boys develop a close relationship. When Robert's teacher encourages Maxine to enter her son in the Special Olympics, Vernon organizes a neighborhood carnival to raise the money. The carnival becomes a huge success, and Vernon feels proud of his accomplishment and disillusioned that he felt incompetent for so long.

When summer comes, Vernon passes all his needed courses, thanks to Miss Annie's diligent tutoring. He also takes Robert to the Olympics. The two boys enjoy the event immensely, and Vernon feels that Robert has become a close friend. However, he learns, at the end of the day, that Maxine has decided to send Robert to North Carolina to live with family, because she feels her alcoholism prevents her from taking care of him properly. Vernon reacts with much anger and sadness.

The day Robert leaves for North Carolina, the neighborhood turns out to give him dozens of going away presents. Vernon runs alongside the car until he cannot keep up. When he lands, sobbing, alongside the road, Vernon's father is there to pick him up.