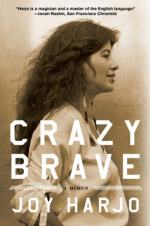 Joy Harjo
This Study Guide consists of approximately 38 pages of chapter summaries, quotes, character analysis, themes, and more - everything you need to sharpen your knowledge of Crazy Brave.

The following version of this book was used to create the guide: Harjo, Joy. Crazy Brave. W.W Norton & Company, 2012.

Joy Harjo’s memoir opens to an event from childhood where she is in the backseat of her father’s car, driving through Tulsa, and hears jazz. She has a strong and palpable feeling towards the music and how it is able to communicate without words. The memoir then switches to her roots, and she writes of her ancestors, such as her paternal great-grandfather finding oil on the allotted Oklahoma lands in 1905, or her maternal grandparents who were destitute and living in an abandoned building. She writes about how her parents met at a dance, fall in love, then Joy was born a year later. Harjo’s mother had a difficult birth with Joy, both nearly died. She considers her early years as joyous, especially the time with her mother and out in nature. Showing symptoms of polio at age four, her parents take her to the hospital where a painful spinal tap is performed. She watches her helpless parents as doctors and nurses perform their work and realize her parents are not the gods that she thought them to be. She considers her father as distant and recalls memories of waiting for her father who did not show, and his drunken returns from the bars and dancing at night. Her parents’ divorce when Harjo is eight. Woven into the personal narrative are stories and poems; for example, Harjo writes about a trickster rabbit who creates humans, then finds humans a nuisance that cannot be dispensed with.

Harjo’s mother marries a white man 17 years her senior. Though charming during courtship, his controlling and violent-tempered manners are unleashed when Haro’s mother and her children move into this home. Harjo spends eight years in her stepfather’s house that taxes her physically, emotionally, and spiritually. When her stepfather began making advances towards her, she knew it was time to leave. At the age of 16, Harjo is accepted to the Indian Institute of Arts (IAIA) in Santa Fe to study visual arts, and she leaves Tulsa. At IAIA, she meets other Indian students who went through similar hardships at home, and is able to funnel her demoting energy, like inner anger, into art rather than more destructive avenues, such as cutting. At IAIA, a friend suggests she take acting classes, and soon Harjo is in lead roles and in a play that tours the Pacific Northwest. She meets a young man, a dancer and several years her senior, and they become lovers. At the end of high school, Harjo is 18 and pregnant. She returns home to Tulsa briefly, then buys a ticket to her boyfriend’s town in Cherokee lands. She gives birth to a son and lives with her mother-in-law, a temperamental and vindictive woman. Her boyfriend, now husband, has a series of low-paying jobs to keep food on the table for Harjo and his two children, a daughter being from a previous relationship with another teenage woman.

Both Harjo and her husband feel as if their artistic endeavors have been put aside in Tulsa, and they move to Santa Fe. Harjo gets work at a gas station, but half of her paycheck goes to the babysitter. She soon finds her husband is having an affair with that babysitter, and they divorce. Harjo moves to Albuquerque and enrolls in premed classes on a scholarship. Sensing the Indian rights and women’s rights movements, she is compelled to change her major to art to express her building emotions concerning these issues. Here, she meets a Pueblo man who writes poetry. They fall in love and move in together. However, Harjo finds he is an alcoholic and prone to violent outbursts. She is a victim of domestic violence, but stays believing he will change. She finds herself having panic attacks, and it is difficult for her to even cross the street. After running to a neighbor’s house in the middle of the night with her son and now a new daughter she had with the Pueblo man. She ends the relationship, but gains a newfound love of poetry, a relationship she keeps.

More summaries and resources for teaching or studying Crazy Brave.