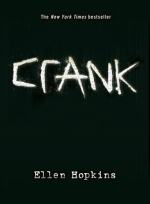 Plot Summary
+Chapters Summary and Analysis
Flirtin' with the Monster through At Least I Had Something
Dad Had to Go to Work through He Knew it, Too
His Mom Was at Work through I Thought I Knew the Way Home
I Tried to Be Cool through Instead We Returned to Small Talk
Dad Went Out through Despite All Trepidation
I Slithered Down the Hall through Mom Knocked on My Door
Over Lasagna and Garlic Bread through I Pondered That
Did it Show through GUFN Again
Leigh Headed Back to School through Major Mistake
I Did through The Game Replayed
Answer Before They Ask through Intervened
Robyn was Game through Chase was Right There
I was Aglow through Cause and Effect
Back in My Room through My Mom ?!?!
The Kitchen was Warm through Happy Endings
Free Quiz
Characters
Objects/Places
Themes
Style
Quotes
Topics for Discussion
Order our Crank Study Guide

Ellen Hopkins
This Study Guide consists of approximately 46 pages of chapter summaries, quotes, character analysis, themes, and more - everything you need to sharpen your knowledge of Crank.

This detailed literature summary also contains Topics for Discussion and a Free Quiz on Crank by Ellen Hopkins.

Crank by Ellen Hopkins tells the story of a teenage girl who becomes addicted to crank, a form of methamphetamine. The novel follows Kristina's downward spiral as she attempts to feed her addiction and deal with the consequences of the bad decisions that she has made. At one of her lowest points, Kristina learns that she is pregnant by a man who raped her. Although she realizes how much destruction the drugs have brought into her life, Kristina still is unable to break her addiction.

Kristina begins taking drugs during a trip to visit her birth father in Albuquerque. Kristina is already feeling misplaced in her family by her stepfather and younger brother. She is deeply disappointed when she learns that her father is not the prince that she imagined him to be. Instead, he is distant and uninterested in Kristina. It is during this time of emotional distress and upheaval that Kristina meets her first boyfriend, Adam. It is during this time that Kristina gives birth to a new personality whom she will come to call Bree. Kristina describes Bree as the essence of herself. While Kristina is a traditional good girl, Bree throws caution to the wind. Bree flirts with boys, wants to experience the wild side of life, and takes drugs.

Author Ellen Hopkins tells a powerful story about how easy it is to get addicted to drugs and how difficult it is to break away from these drugs. Hopkins shows that even the most unlikely teenagers are susceptible to drug abuse and addiction. This drug addiction can lead to decisions, such as Kristina's decision to date Brendan, which will affect the teens for the rest of their lives. Perhaps as important as the power of Hopkins' story is the way she tells it. Hopkins uses the physical form of her lyrics, as well as the words that she chooses, to help express the story she wants to tell. Stanza spacing, word spacing, word placement, and rhythm of the words all work together to help Hopkins tell her story in a very powerful and memorable way.

More summaries and resources for teaching or studying Crank.