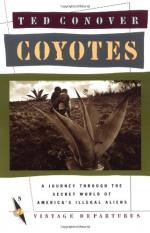 Plot Summary
+Chapters Summary and Analysis
The Gringo and the Mexicano
Deep into the Orchard
Welcome to L.A.
Phoenix to Florida at 25 MPH
In the Land of Avocados
Coming Into the Country; Epilogue
Free Quiz
Characters
Objects/Places
Themes
Style
Quotes
Topics for Discussion
Order our Coyotes: A Journey Through the Secret World of America's Illegal Aliens Study Guide

Ted Conover
This Study Guide consists of approximately 27 pages of chapter summaries, quotes, character analysis, themes, and more - everything you need to sharpen your knowledge of Coyotes.

Coyotes: A Journey Through the Secret World of America's Illegal Aliens Summary & Study Guide includes comprehensive information and analysis to help you understand the book. This study guide contains the following sections:

This detailed literature summary also contains Topics for Discussion and a Free Quiz on Coyotes: A Journey Through the Secret World of America's Illegal Aliens by Ted Conover.

Journalist Ted Conover was in his late twenties and working on a story in Mexico about the impact of illegal immigration on both the Mexican and American societies when he was told that describing a border crossing was difficult. An old man toldTed that to truly appreciate a crossing, a person had to experience it. Ted set out to do that, meeting up first with a young Mexican named Alonso. Together, the two men were picked up by coyotes, a group of men who specialize in helping Mexicans cross the border illegally. In a leaky raft, they were ferried across the river separating the two countries, and Ted soon found himself making friends with others who had also endured the crossing in the hope of finding a better life in America.

Over the following months, Ted continued to follow various groups. He traveled from the orange and lemon groves of Phoenix to the crowded industrial neighborhoods of L.A. From there he made his way back to Phoenix and later caught a ride in a beat-up station wagon headed to Florida. The trip, described by Ted as having an average speed of twenty-five miles per hour, taxed Ted's patience, but his Mexican counterparts didn't understand his impatience. Ted next traveled back to Mexico, was delayed when the group is captured by the police trying to cross with another group of Mexicans, and went on to make a successful crossing over the coming days.

Ted learned about the people who made up the illegal alien immigration movement. He said that they are hard-working and that he'd welcome them as neighbors. He said they have the ambition normally approved of in Americans but lack the ability to better themselves without making the trip across the border. Some he met remained for the months of a particular growing season and others settled in, made homes and lives for themselves, and remained indefinitely. Some wanted to send money home and others see the work as a way to buy things for themselves.

Always, there was the fear of the Immigration and Naturalization Service. While the immigrants were fearful of being arrested and/or deported, many considered the adventure and money well worth the risk. One mother told Ted that her son was arrested in Texas and spent a month in jail there, but that the son hadn't counted it a huge ordeal, talking about his freedom to move around among the other prisoners and to talk with them. In addition, those crossing the border and those who have arrived were often the target of crimes. Because they were unwilling to call on the police for help, they were victimized more than they might otherwise be. They were also unwilling to call attention to themselves and so often give in to demands for money, extortion or other crimes rather than risk police intervention.

Ted also learned about the impact on the Mexican economy and culture. While many of the young men of working age were rushing to make their way across the border, the wives, girlfriends and children were left at home to try to survive the poverty and, more importantly, the loneliness.

More summaries and resources for teaching or studying Coyotes: A Journey Through the Secret World of America's Illegal Aliens.

Coyotes: A Journey Through the Secret World of America's Illegal Aliens from BookRags. (c)2022 BookRags, Inc. All rights reserved.