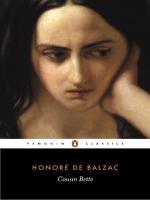 Honoré de Balzac
This Study Guide consists of approximately 45 pages of chapter summaries, quotes, character analysis, themes, and more - everything you need to sharpen your knowledge of Cousin Bette.

This detailed literature summary also contains Topics for Discussion and a Free Quiz on Cousin Bette: Part One of Poor Relations by Honoré de Balzac.

Cousin Bette by Honoré de Balzac is more the story of an entire family rather than that of one person. Lisbeth Fischer, known to her family and friends as Bette, has harbored a resentment against her cousin Adeline Hulot since childhood. Bette's father and Adeline's father were two of the Fischer brothers. Their uncle, Johann Fischer, brought the girls up and still contributes to their financial well-being as adults. Adeline and her cousin Bette are exact opposites. Adeline is fair-haired and of light complexion while Bette is dark and rather ugly. Bette sees Adeline as the enemy because of her beauty and good fortune in life. Adeline is married to Baron Hulot, a successful government employee and one-time benefactor to the Fischer brothers. After Bette moves to Paris at Adeline's insistence, she hatches a plot to destroy the beautiful Adeline, her husband and their children.

Bette is neighbors with Valérie Marneffe and her husband, a civil servant and one of Hector Hulot's subordinates in the War Office. Bette also provides for the care and upkeep of Count Wenceslas Steinbock, a Polish refugee and talented artist who lives in the garret above her. It just so happens that Steinbock lives as Bette Fischer's protege until Steinbock meets and marries Hortense Hulot. In the meantime, it is revealed that Baron Hulot's family is on the threshold of financial and social ruin because of his countless affairs with women. Bette uses Hector's weakness against him when she facilitates an affair between him and Valérie Marneffe. Another associate of the Fischer-Hulot family, Monsieur Célestin Crevel, competes with Baron Hulot in a treacherous game involving mistresses. Crevel and Hulot are in-laws, as Hulot's son Victorin is married to Crevel's daughter Célestine. Monsieur Crevel's visit to Adeline Hulot is what sets the plot of the novel in motion.

Cousin Bette and many of the primary protagonists in the novel are afflicted with the vices of greed, envy, and lust. Bette's greed seeks to overthrow Adeline Hulot. Madame Marneffe's greed and lust are only satisfied by acquiring wealth and material possessions. Baron Hulot's lust carries him from one affair to the next and his greed deepens his financial trouble each time. Crevel's greed motivates him to "steal" a mistress from Hector Hulot only to have it cost him his life. The morals and standards of nineteenth century French society come under the author's scrutiny in Cousin Bette. The novel is also a critique of the concept of a French ruling class after the reign of Napoleon Bonaparte. Balzac's novel is also a morality play in that the characters are imaginative figures as well as character types. And while the story in and of itself is tidily resolved, the narrative nonetheless exposes an underside of human behavior that is puzzling at best and deadly at worst.

More summaries and resources for teaching or studying Cousin Bette: Part One of Poor Relations.