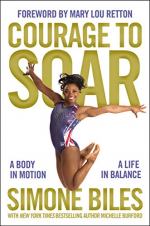 Simone Biles
This Study Guide consists of approximately 70 pages of chapter summaries, quotes, character analysis, themes, and more - everything you need to sharpen your knowledge of Courage to Soar.

This detailed literature summary also contains Topics for Discussion on Courage to Soar by Simone Biles.

The following version of this book was used to create this study guide: Biles, Simone. Burford, Michael. Courage to Soar: A Body in Motion, A Life in Balance. Zondervan, 2016.

The first chapter shifts to Simone’s perspective and to the first person, which remains consistent for the remainder of the memoir. Simone describes her failure to make the national women’s artistic junior gymnastics team by only one place in 2011.

The next chapter turns to Simone’s early childhood; the rest of the memoir is structured chronologically. Simone was born in Ohio to a woman named Shanon and had three siblings: older siblings Ashley and Tevin, and a younger sister Adria. Because Shanon had a drug addiction, Simone and her siblings were eventually placed into foster care and then taken in by Shanon’s father and his wife, Poppa and Momma Biles. Eventually, Simone’s two older siblings returned to Ohio and were adopted by Poppa Biles’ sister, while Simone and her younger sister Adria were adopted by Poppa and Momma Biles.

Simone began taking gymnastics lessons after a class field trip to a gym, and quickly moved through the levels of the Junior Olympic (JO) Program, a competitive gymnastics league. She completed the top levels, nine and ten, while still in middle school. In 2008, she placed second all-around in the state championship and qualified for the JO Gymnastics Western Championships--as a reward, her dad gave her a dog. Simone began winning meets regularly and placed fourth all-around at the Western Championships and third all-around and first in the floor exercise at nationals. In 2011, she won gold at her first meet as an elite gymnast. After her coach, Aimee, sent a video of her performance to national team coordinator Martha Karolyi, Simone was invited to the famous developmental camp at Martha's ranch in Huntsville, Texas.

Simone’s parents were strict while she was growing up, but she made good friends and had fun pretending to be a Cheetah Girl. When Simone was seven, her grandmother fell ill and moved from Belize to Texas to live with Simone's family. She eventually died after a battle with pulmonary fibrosis. Middle school was uneventful for Simone until she had to transfer to a private school closer to her gym in order to increase her training hours; she disliked this school.

After Simone’s 2011 failure to make the national team, she made the difficult decision to be homeschooled in order to continue her elite gymnastics career. Although Simone was disappointed to miss high school events like prom, she enjoyed homeschooling with her tutor, Miss Heather. For her first few years of high school, Simone had a bad attitude towards her coaches, but she continued to train and perform very well. At the 2012 American Classic, Simone scored first all-around for her age category and automatically qualified for the Visa National Championships.

The following year, Simone received Catholic confirmation and her long-time coach Aimee quit working at Simone's gym, so Simone's parents built their own gym in order for Simone to continue training with her coach. In 2014, Simone again won the National Championships and Worlds. In a “three-peat,” she again won the World championships in 2015, becoming the most decorated female gymnast in Olympic history.

At 18, Simone visited the University of California at Los Angeles (UCLA) and committed, but had to retract because she decided to go professional. Simone concluded the memoir with her experience at the Olympics shortly after, when her team—the “Final Five” won gold and she won gold all-around individually, with golds in both floor and vault and a bronze on beam.

More summaries and resources for teaching or studying Courage to Soar.