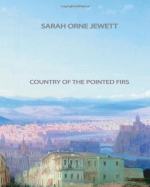 Sarah Orne Jewett
This Study Guide consists of approximately 50 pages of chapter summaries, quotes, character analysis, themes, and more - everything you need to sharpen your knowledge of The Country of the Pointed Firs.

A Country Doctor (1884) is Jewett's novel based on her father's experiences as a doctor serving inhabitants of rural Maine.

The Best Stories of Sarah Orne Jewett (1925), edited and with an introduction by Willa Cather, includes Jewett's major short stories from throughout her career.

Uncle Tom's Cabin (1852), by Harriet Beecher Stowe, is the masterpiece novel of one of the leading "local color" writers of the nineteenth century and a major influence on Jewett. Uncle Tom's Cabin was an extremely influential antislavery novel published before the Civil War.

The Adventures of Huckleberry Finn (1884), by Mark Twain, is one of the greatest American novels of the nineteenth century and a major work of "local color" writing. It concerns the experiences of a white boy, Huck Finn, after he runs away from home in the company of Jim, an escaped slave. Twain was a...

More summaries and resources for teaching or studying The Country of the Pointed Firs.

The Country of the Pointed Firs from Gale. ©2005-2006 Thomson Gale, a part of the Thomson Corporation. All rights reserved.