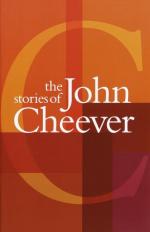 John Cheever
This Study Guide consists of approximately 50 pages of chapter summaries, quotes, character analysis, themes, and more - everything you need to sharpen your knowledge of The Country Husband.

1950s: In schools, children are taught how to react in the event of a bomb threat from a foreign nation. Such precautions are considered a necessary part of living in the Atomic Age.

Today: Now that the Cold War is over, most Americans feel little threat of a full-blown nuclear war. In schools, children have fire drills and, in certain parts of the country, tornado drills.

1950s: The suburbs are considered an appropriate environment for rearing children and belonging to a tight-knit community. Because so many people in the suburbs seek a sense of community, various activities, organizations, and social networks emerge.

Today: People move to the suburbs for the same reasons that they moved there in the 1950s. While some of the organizations and gatherings are different, the motivations to participate are the same.

1950s: Most of the country's population growth takes place...

More summaries and resources for teaching or studying The Country Husband.

The Country Husband from Gale. ©2005-2006 Thomson Gale, a part of the Thomson Corporation. All rights reserved.