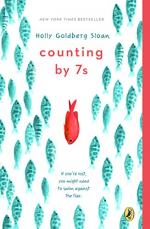 Holly Goldberg Sloan
This Study Guide consists of approximately 71 pages of chapter summaries, quotes, character analysis, themes, and more - everything you need to sharpen your knowledge of Counting by 7s.

This detailed literature summary also contains Quotes and a Free Quiz on Counting by 7s by Holly Goldberg Sloan.

Losing one’s parents is never easy, and for 12-year-old Willow Chance losing her adoptive parents in a car wreck is devastating. The book “Counting by 7s” charts Willow’s journey through her grief to the realization that her life will go on. Although she had no relatives or close family friends, an unusual group of people steps forward to become a surrogate family to this unusual but highly intelligent girl. As they bond, those helping Willow realize their lives are enriched by her as much as her life is bettered by them.

Willow is an adopted, only child who has recently started classes at a new school. Both she and her parents hoped she’d have a better school experience at this new school but within days of the beginning of school she’s referred to a counselor because a teacher believes she cheated in order to ace a standardized test. Her counselor, Dell Duke, realizes that Willow is of exceptional mental capacity; in fact, he labels her a genius.

Willow arrives early for a counseling session and meets Mai and Quang-ha Nguyen. Willow and Mai become friends. She learns Vietnamese so she can converse with Mai in her native tongue. In order to arrive at the counseling office more quickly, Willow takes a taxi one day. Her driver is Jairo Hernandez who quickly tags Willow as his angel after she first encourages him to pursue his dream of going back to school, then warns him of a dangerous mole on his neck.

One day before Willow’s counseling session, Mai convinces the bumbling counselor Dell the take the two girls, along with her brother Quang-ha, who is also being counseled, for ice cream. After they finish and Dell takes Willow home, they are shocked to see a police car in Willow’s driveway. Willow’s parents have been killed in a car wreck, Dell learns. Mai sits on the steps with Willow as she cries until Willow is willing to go inside. Once inside, Mai finds the library book that Willow had checked out to learn Vietnamese. She decides the girl is coming with her and convinces her mother to let them keep Willow overnight.

The following day, Willow is forced to go to the Jamison Children’s Center. She faints when she sees a picture of her parents’ wreck on the front page of the newspaper. At the hospital where she has been taken for stitches, she runs away, calling Jairo to take her to the library. Hoping to be a hero, Dell enlists Mai to help him find Willow but Mai takes charge. When Willow is found, temporary custody is given to the Nguyens.

Because Pattie Nguyen and her family lives in a garage behind her nail salon, she put down Dell’s address of her own. When social services calls to schedule a home visit, Pattie must scurry to convert Dell’s messy bachelor apartment into one that looks like a family lives there. Once they’ve passed their first inspection, Pattie decides it would be easier for them just to stay there instead of moving back and forth. She sets Dell up with a man down the hall who wants a roommate.

Willow, whose parents had encouraged her to turn their backyard into a garden as a form as social interaction, soon misses that garden. She asks Dell to buy her a pack of sunflower seeds. These sunflowers are the beginning of a group project to turn the rock covered apartment courtyard into a garden. Along the way, Dell, Willow, Mai and Quang-ha experience annoyance when people fight over the rocks in the courtyard they have decided to give away and then frustration when wind blows dirt and debris over all of the first floor apartments. Use of a pressure washer not only cleans away the dirt but also removes the ugly pink paint and stucco covering the apartments to reveal an attractive exterior. Even Jairo lends a hand to wash windows that have been covered with grit.

After the sunflowers have been planted in the courtyard, Willow begins gathering clippings for the garden once the flowers have died. She believes it’s a sign that she won’t be living at the apartments much longer when a maintenance man goes to the roof to fix a leak and throws away all of the plants she’d been cultivating there. To her surprise, however, a nursery owner with whom she’d worked before steps in to provide plants and trees to fill the area.

Soon after the garden is finished, a custody hearing for Willow is set. Although Willow is told she will be sent to a group home she gets a surprise when she goes into the judge’s chambers. Pattie, Jairo, Mai, Quang-ha and Dell are all waiting for her there. Pattie and Jairo have filed and have been approved for permanent custody of Willow. Willow is overjoyed. As she sits by herself near her new garden later that day, she pushes an acorn, which Mai had called her lucky acorn, into the dirt. She believes for the first time in a long time that her life will go on.