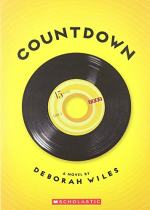 Deborah Wiles
This Study Guide consists of approximately 51 pages of chapter summaries, quotes, character analysis, themes, and more - everything you need to sharpen your knowledge of Countdown.

This detailed literature summary also contains Quotes and a Free Quiz on Countdown by Deborah Wiles.

Franny Chapman is an 11-year-old student and the middle child of a military family during the weeks of the 1962 Cuban missile crisis. She is a thoughtful, intelligent girl but is caught up in the daily aspects of her life, including her relationship with her younger brother, her older sister, her uncle, her best friend, and a boy who has just moved back to the neighborhood. At first, the situation in Cuba is a background to her daily life, but she is soon among those caught up completely in her fear that the Cubans will attack.

Franny's family lives the typical life of a military family of the time. She and her family live just off the military base and her father is an officer. Her mother does not work but lives in the strict social code of the time and place. For example, her mother worries what the other military wives will think about Uncle Otts' strange behavior.

When the Cuban Missile Crisis reaches its peak, the school children are taught to “duck and cover” in the event of an attack and the entire population is on edge, spurred on by official warnings that an attack could be imminent and would be met with a retaliatory attack. Franny and her brother, Drew, are fearful about the state of the world even while their lives go on. One major aspect of her life at this time is the status of her older sister, Jo Ellen, who is a college student. Jo Ellen is often absent and is being secretive at a time when people fear spies and any deviation can be a reason for official questioning. Franny discovers that Jo Ellen is hiding letters and when she takes one, she finds acronyms and numbers that seem to make up a code. She is terrified that Jo Ellen is involved in something secret, but that turns out not to be the case.

Meanwhile, Halloween is approaching and a boy named Chris has moved back to the neighborhood. Franny is interested in Chris, but so is her best friend, Margie. Margie's friendship begins to shift and she has a fight with Franny that lands them both in the principal's office. Jo Ellen helps Franny attend a Halloween party in the neighborhood while their parents are away for the evening, though they know Mrs. Chapman would not approve. A near-tragedy puts Margie and Franny in serious danger but Chris goes for help and adults arrive to save the girls.

As the situation in Cuba settles to a less-dangerous state, Margie tries to renew her friendship with Franny and Franny discovers that she has the power to accept or refuse. She decides that she will have to give it some time. Through the events leading up to this point, she learns the importance of loyalty and friendship, and that fear – though often unavoidable – can be survived.

Throughout the novel, the author includes historical documents, photos, news accounts, and quotes that were popular and important to the time. These give the reader a sense of what Franny saw and learned during her daily life, including music, television, and the social and political climates.

More summaries and resources for teaching or studying Countdown.