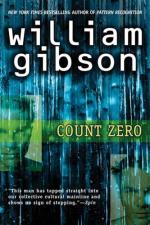 William Gibson
This Study Guide consists of approximately 38 pages of chapter summaries, quotes, character analysis, themes, and more - everything you need to sharpen your knowledge of Count Zero.

This detailed literature summary also contains Topics for Discussion and a Free Quiz on Count Zero by William Gibson.

Count Zero is a cyberpunk novel, taking place in a corporate-ruled future where information is shared in a mass construct called cyberspace. Turner is a mercenary hired to help a scientist escape from his contract with a large corporation and defect to another corporation. Instead, he winds up with the scientist's daughter, who has been implanted with brain biomechanics that allow her to channel artificial intelligences living as gods in cyberspace. Turner helps her escape to a group of voodoo practitioners who deal with the cyberspace gods before he retires from his life as a mercenary.

As the novel begins, Turner is blown up during a job in New Delhi and is reconstructed. In Mexico, he becomes involved with an undercover psychologist sent to check him out for his next mercenary job, extracting a scientist from one corporation to work for another corporation. On this job, things go wrong. The target's plane arrives, with corporate security on its tail, but the target is not the scientist Turner expected. It's the scientist's daughter, Angie Mitchell. Turner takes off in a plane with Angie, and behind them the extraction site explodes in a white light. Unsure who to trust, Turner takes Angie to his brother's rural home, where they discover a strange implant in Angie's brain that causes trances, wherein Angie seems to channel voodoo gods.

Meanwhile, Marly, a Parisian former art gallery owner, is hired by ailing billionaire Josef Virek to find the artist who made several collages. She becomes increasingly concerned about Virek and his web of influence, but she finds the location of the artist, on an abandoned mainframe station in orbit around Earth. It's an artificial intelligence using mechanical manipulators and sensors, and it communicates with smaller AIs that exist as voodoo gods in cyberspace.

In New Jersey, Bobby Newmark, a.k.a. Count Zero, goes on his first cyberspace run, where he is almost killed. He finds that big companies are after the software he's used, and they blow up his house. The software was being tested on him by big-money followers of voodoo, and Bobby was saved by someone they call the Virgin. The voodoo followers bring Bobby to a club called Jammer's to keep him safe, but soon their closed in by gang members. Bobby goes into cyberspace and finds that Jaylene Slide, a cyber runner, is looking for whoever killed her lover at the botched Mitchell extraction.

Turner arrives with Angie, brought there under the direction of voodoo gods, who live in cyberspace. They discover that Conroy double-crossed Mitchell, and he's working for Virek. Bobby goes into cyberspace to tell Jaylene that Conroy is the culprit, and he finds himself face-to-face with Virek. Bobby lets one of the voodoo gods take him over, an ability he gained by using the AIs' illicit software, and kills Virek. Then he gives Conroy up to Jaylene, who has him killed. Turner retires from his mercenary life, while Bobby and Angie join the voodoo followers to learn about their role. Several years later, Angie is an up-and-coming media star, with Bobby as her bodyguard.

More summaries and resources for teaching or studying Count Zero.