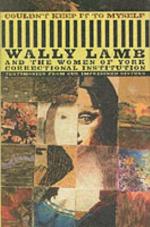 Couldn't Keep It to Myself: Testimonies from Our Imprisoned Sisters Summary & Study Guide

Wally Lamb
This Study Guide consists of approximately 30 pages of chapter summaries, quotes, character analysis, themes, and more - everything you need to sharpen your knowledge of Couldn't Keep It to Myself.

Couldn't Keep It to Myself: Testimonies from Our Imprisoned Sisters Summary & Study Guide Description

Couldn't Keep It to Myself: Testimonies from Our Imprisoned Sisters Summary & Study Guide includes comprehensive information and analysis to help you understand the book. This study guide contains the following sections:

This detailed literature summary also contains Topics for Discussion and a Free Quiz on Couldn't Keep It to Myself: Testimonies from Our Imprisoned Sisters by Wally Lamb.

The book is organized into thirteen chapters. The first chapter is written by Wally Lamb, and it provides the background information for the book. Wally does not want to volunteer at York at first, but after his first visit, he is continually drawn to the group. He learns the personal stories of the women in prison through their writing and is struck by the difference between common misconceptions of prisoners and the real women behind bars.

Wally is inspired by their writing and decides to use his own money to help them publish this book. However, when his publisher reads just one story, she offers to publish the book for mass distribution. Wally hopes that this book will help people abandon their biases. There are things that everyone should know about prisoners and prisons. There are hearts and minds around the world that need to be opened. That is his purpose for this book.

The next eleven chapters are autobiographical stories from prisoners who have taken part in his workshop. As the reader takes in each story, common themes of abuse, abandonment, and chaos emerge in the lives of these women. There is also another very strong thread, and that's hope. Each of the women is using her writing to build a stronger sense of self and to finally have a voice. Much of their lives have been filled with silence and secrets, and through their writing, they finally have a chance to speak out and tell the truth. This gives them a new sense of freedom, even behind bars.

The final chapter is written by Dale Griffith, who is one of the teachers at York School. She believes that it is a calling to work with these women, and she is the one who contacted Wally Lamb and talked him into coming to York to teach the writing workshop after a rash of suicides and suicide attempts rocked the prison. Dale could see that the women were hurting and she knew that writing could be a vehicle for healing. She believed that Wally Lamb's celebrity status might draw in more students. She was absolutely right. The writing workshop has grown in popularity over the years and women are healing themselves through their diligent writing.

Dale Griffith is a gift to her students and they are a gift to her. She feels incredibly lucky to get to work with the women at York every day.

More summaries and resources for teaching or studying Couldn't Keep It to Myself: Testimonies from Our Imprisoned Sisters.

Couldn't Keep It to Myself: Testimonies from Our Imprisoned Sisters from BookRags. (c)2022 BookRags, Inc. All rights reserved.