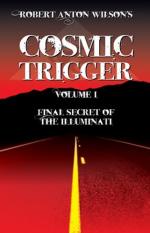 Robert Anton Wilson
This Study Guide consists of approximately 30 pages of chapter summaries, quotes, character analysis, themes, and more - everything you need to sharpen your knowledge of Cosmic Trigger I.

Cosmic Trigger I: Final Secret of the Illuminati Summary & Study Guide includes comprehensive information and analysis to help you understand the book. This study guide contains the following sections:

This detailed literature summary also contains Topics for Discussion and a Free Quiz on Cosmic Trigger I: Final Secret of the Illuminati by Robert Anton Wilson.

The author, Robert Anton Wilson, begins studying the legend of the Bavarian Illuminati in about 1963. The Illuminati are said to be a secret conspiracy out to run the world. Wilson takes mind-altering drugs and sees visions such as of the little green man, Mescalito. Wilson relates this to studies of people contacted by UFOs, extraterrestrials, and even stories of leprechauns. Wilson studies the work of the English occultist Aleister Crowley on sex magic. Wilson looks at coincidences in the circumstances of the assassination of President John F. Kennedy. In 1964, as a journalist, Wilson first meets Timothy Leary and talks to him about his psychological experiments using LSD. Wilson studies a series of coincidences involving the number 23. Leary continues to promote LSD research, and is soon busted for transporting drugs. Wilson becomes friends with Kerry Thornley, and makes many jokes involving Thornley's pseudo-religion called Discordianism.

Members of Wilson's family claim to meet extraterrestrials in suburban New Jersey. Wilson again takes LSD and listens to a sort of prayer by Aleister Crowley on tape, and tries to contact different occult entities. Leary is in jail and in an interview with Wilson, talks about going to outer space. Wilson is working with Bob Shea to write the book, Illuminatus. Wilson studies Dr. Paul Segall's work on freezing the human body to revive it at a later date. Wilson is mostly unemployed and his family live in a rough neighborhood. Wilson's daughter Luna is 13 years old and is beaten up by other children, but soon recovers.

Wilson researches other writings on the occult, such as that of Jack Parsons, promoting Crowley style sex yoga magic. Other links to the star Sirius are studied, such as the masonic symbol of the eye of Horus. Wilson is fascinated that Crowley writes down the so-called Book of Law and tells of the Egyptian goddess Nuit, a connection to Sirius. Wilson is again contacted by Kerry Thornley, who now suspects that he could have been brainwashed to be an unwitting part of the JFK assassination plot. Soon, after Thornley is robbed and beaten.

Wilson finally sees Timothy Leary in jail again. Leary is denied parole, but there is a big protest by the PEN organization and soon Leary is freed. A fan of Leary, Saul-Paul Sirag tells Wilson about his experience with an alien entity. Sirag sees a Horus Hawk, and Wilson connects this with his own experiences with Sirius. This is also connected with reports that aliens are sacrificing cattle, and perhaps children. A book, Temple's Sirius Mystery, reports on primitive African tribes having knowledge of the twin stars of Sirius thousands of years ago. Wilson examines theories that violate ideas of locality, where space-time is bounded by the speed of light. In this way, Wilson tries to reconcile physics with observations of extraterrestrials from across the universe. Leary has a theory of 8 brain compartments or spheres. The highest circuits involve astral projections of a person's body. Leary hopes to use the two highest levels of consciousness as a way towards space migration, increased intelligence and life extension. Wilson speculates that man may soon become unrecognizable and godlike. Wilson has some writing successes, and his book Illuminatus is turned into a play in England. Wilson goes on another drug trip to visit a god connected to Sirius, according to Crowley. Saul-Paul Sirag theorizes that occult events are made by themselves in the future. Wilson gets an ESP message that his son Graham will die. Soon after, Wilson's daughter Luna is beaten to death in a burglary. Wilson gets help to preserve Luna's brain for possible future revival.

More summaries and resources for teaching or studying Cosmic Trigger I: Final Secret of the Illuminati.

Cosmic Trigger I: Final Secret of the Illuminati from BookRags. (c)2022 BookRags, Inc. All rights reserved.