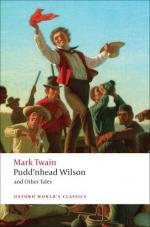 The Man That Corrupted Hadleyburg Characters

Mark Twain
This Study Guide consists of approximately 71 pages of chapter summaries, quotes, character analysis, themes, and more - everything you need to sharpen your knowledge of The Man That Corrupted Hadleyburg.

Billson is a Deacon with the nickname "Shadbelly." He is the first of the nineteen claiming ownership of the sack. When Burgess reads his name, the crowd doubts that Billson could have been so generous, shouting: "Billson! Oh, come, this is too thin! Twenty dollars to a stranger-or anybody-Billson"; Wilson falsely accuses him of plagiarism.

The letter attached to the sack authorizes Burgess to break the seals of the sack and the enclosed envelope. Unaware that Edward Richards concealed information that could have cleared him of wrongdoing in a previous scandal, Burgess regards Edward as his savior for advising him to leave town. Burgess repays his perceived debt by not announcing Edward's name at the town meeting, which leads everyone to believe that Edward is the only truly honest man in town. After the stranger gives the Richardses the proceeds from the auction, Burgess...

More summaries and resources for teaching or studying The Man That Corrupted Hadleyburg.

The Man That Corrupted Hadleyburg from Gale. ©2005-2006 Thomson Gale, a part of the Thomson Corporation. All rights reserved.