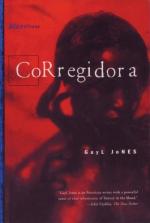 This detailed literature summary also contains Topics for Discussion and a Free Quiz on Corregidora by Gayl Jones.

Ursa is a singer at Happy's club but her husband, Mutt, doesn't like it, saying that the men touch Ursa with their eyes. They argue one evening and Ursa "falls" down the steps, though she later reveals that Mutt threw her down. She loses the baby she is carrying and has to have surgery to remove her womb. The owner of Happy's, Tadpole McCormick, agrees to take her home, takes her to his place and bans Mutt from Happy's. Tadpole cares for Ursa until she recovers and she agrees to marry him soon after her divorce is finalized.

Ursa soon returns to the stage but things are not smooth for the newlyweds. When Ursa is offered a job singing at Spider's, she takes it, citing the fact that she's singing and living in the same building and that she needs a change. She comes home one night to find Tadpole drunk in bed with her replacement, a young singer named Vivian. Ursa leaves and refuses when Tadpole asks her to come home. She soon goes to work fulltime at the Spider and remains there many years, eventually reconnecting with Mutt.

While Ursa is living her life, she is constantly remembering the lives of her grandmother and great-grandmother, both owned and abused by a Portuguese plantation owner, Corregidora. The stories she's been told are vividly recreated and related to her from an early age. She recalls sitting in the lap of her great-grandmother who had been among the women Corregidora used as a whore for men, keeping the money generated, selling of many of the offspring born of these unions and keeping a tight control. When slavery is abolished, all the papers proving lineage are destroyed but Ursa's grandmother and great-grandmother point out that as long as there are Corregidora women alive, the proof of the slave master remains.

Having been raised with the knowledge that her goal in life is that of "making generations," the loss of her womb becomes especially painful. Tadpole and others are merciless in their taunting and Ursa herself is frightened of what her life will be without that vital part. Ursa knows the story of Corregidora by heart but is an adult before her mother is willing to talk frankly about the father Ursa never knew