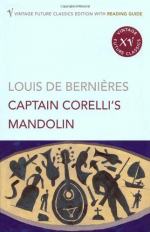 Antonio Corelli is a musician and an officer in the Italian Army in the Acqui Division. When Italy occupies Greece in World War II, Corelli is assigned to the Greek island of Cephallonia. He is a lighthearted man, prone to making goofy jokes and having fun.

Corelli is an accomplished musician and he carries his mandolin, which he has named Antonia, with him everywhere. He practices every day and intends to have a career as a musician after finishing his army service. He also organizes an informal singing group among his men, which meets in the latrines every day.

Corelli falls in love with Pelagia, the daughter of the island's doctor, and promises to return to her after the war. When he does return, he mistakenly assumes she has married someone else and does not contact her. He moves to Athens and builds a successful career...