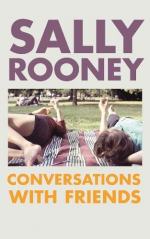 Rooney, Sally
This Study Guide consists of approximately 59 pages of chapter summaries, quotes, character analysis, themes, and more - everything you need to sharpen your knowledge of Conversations with Friends.

This detailed literature summary also contains Quotes and a Free Quiz on Conversations with Friends by Rooney, Sally.

The following version of this book was used to create the guide: Rooney, Sally. Conversations With Friends. Hogarth, 2017.

This novel is divided into two books. All of the events discussed have already taken place. First, the protagonist and narrator, Frances, tells the reader about the first time her best friend, Bobbi, and she visited the house of photographer and local celebrity, Melissa Conway. Bobbi was besotted by Melissa. Frances, a graduate struggling student whose has experienced poverty due to the unreliability of her alcoholic father, coveted the comparative wealth of Melissa and her husband, actor Nick Conway. Impressed by Frances and Bobbi's spoken word poetry performances of Frances' work, Melissa asked if she could take photos to run with a magazine profile piece on the pair. Flattered, Frances and Bobbi readily agreed. Frances and Bobbi frequently spent time with the Conways. Bobbi flirted archly with Melissa, but Frances began a secret flirtation with Nick. After Frances attended one of Nick's plays, the two corresponded nightly via email. Though it began as an intellectual flirtation, their erotic connection became increasingly sensuous. At Melissa's birthday party, Nick put his cold beer bottle against Frances' cheek, the back of her leg, and her collarbone. The two kissed. Nick told Frances they should not kiss at Melissa's birthday party. Eventually, the two began an affair. Nick initiated their erotic contact, but Frances initiated their affair. Their sexual bond strengthened their emotional bond. Despite her increasing closeness to him, Frances decided not to tell Bobbi about her affair with Nick.

After Frances and Nick broke up due to Frances' feeling neglected while Nick was on film shoots, Melissa invited Bobbi and Frances to Melissa and Nick's vacation house. At Bobbi's urging, Frances accepted the invitation on behalf of Bobbi and herself. Frances and Nick rekindled their relationship, after admitting they had misunderstood each other's feelings during their breakup. In pain due to cystitis, Frances was cold towards Nick, because she wanted him nearby to comfort her. Depressed and ill with pneumonia, Nick believed Frances was no longer interested in him. Bobbi became disenchanted with Melissa after Melissa treated all of her house guests cruelly when they were trying to help her prepare for a visit from her agent, Valerie. Though she was no longer interested in Melissa, Bobbi was jealous of Frances' attraction to Nick. Bobbi and Frances had dated in high school, and Nick was Frances' first romantic interest since Bobbi had broken up with her. Bobbi tried to reveal Frances and Nick's mutual attraction to Melissa, but Frances and Nick denied their affair. Later, Bobbi kissed Frances on the mouth. That night, when Bobbi could not find Frances in Frances' room, she asked Nick if he had seen Frances. Sheepishly, Nick admitted Frances was in his bedroom.

After Bobbi and Frances returned from France, Bobbi moved in with Frances. Their relationship was still platonic. Nick confessed to Melissa about his affair. He told her he did not want to leave her, but he also wanted to keep seeing Frances. Since Melissa had had affairs herself, she accepted Nick's conditions for their relationship. Frances and she were never close, but they communicated openly. Frances and Nick became more openly affectionate, since they no longer needed to hide their relationship. Bobbi moved out after she read Frances' first published short story. In the story, Frances confessed that she was still in love with Bobbi. Bobbi was angry because Frances had never shared those feelings with Bobbi. Frances and Nick separated again, because Frances was jealous when Melissa and Nick resumed their sexual relationship.

Throughout the novel, Frances experienced debilitating pelvic pain. While she was at her mother's during break, she again experienced the pelvic pain. When she pulled down her pants, she saw her clothes were soaked with blood. She saw clumps of gray tissue in the blood. Since she could not confirm for her mother than she was not pregnant, her mother drove her to the hospital. The doctor confirmed she was not losing Nick's baby in a miscarriage, because she was not pregnant. Eventually, she was diagnosed with endometriosis. The gynecologist told her endometriosis was a condition wherein the cells of the uterine lining, the endometrium, grew in other parts of the body. The gray clumps she had seen in her blood were pieces of the endometrium. Since the cells could not exit naturally during menstruation, the condition was extremely painful. Sex might become increasingly painful as she aged, and childbearing would be difficult, perhaps impossible. The gynecologist prescribed birth control for Frances, so she could more easily control her menstrual cycles as part of a pain management program. Though she did not share information about her condition with anyone she loved, Frances' endometriosis forced her to confront her feelings about motherhood. Tears were on her cheeks when she held Nick's infant niece, Rachel, during Nick's thirty-third birthday party. After fainting due to the pain from her endometriosis, she wrote an email to Bobbi wherein she apologized for not communicating her feelings to Bobbi earlier and confessed her love for her. Bobbi returned to their shared apartment. Frances and Bobbi rekindled their former romantic relationship, an extension of their preexisting emotional and intellectual bond. They declined to their label relationship, because they did not want to devalue their relationship by adopting labels that privileged a heteronormative value system.

By the end of the novel, Frances had rekindled her romances with both Bobbi and Nick. She only told Nick about her medical diagnosis. She warned him her endometriosis diagnosis might make bearing children harder. Part of her jealousy and coldness towards him during their last separation, she admitted, was an expression of her fear that he might find her physically repulsive. Since the novel was in the past tense, Frances never told the reader how or whether her relationships with Nick and Bobbi ended. On the novel's last page, she told the reader she had to live her life instead of analyzing it.

More summaries and resources for teaching or studying Conversations with Friends.