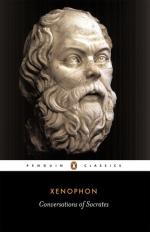 Xenophon
This Study Guide consists of approximately 26 pages of chapter summaries, quotes, character analysis, themes, and more - everything you need to sharpen your knowledge of Conversations of Socrates.

This detailed literature summary also contains Topics for Discussion and a Free Quiz on Conversations of Socrates by Xenophon.

Xenophon of Athens (430-354 BC) was an ancient Greek associate of Socrates, the great philosopher. Socrates wrote none of his own thoughts and activities down, leaving that to his associates. Plato is Socrates's most famous chronicler. Xenophon is another great chronicler of the life and ideas of Socrates, though his history of Socrates' activities is widely considered less reliable, poorly written and overall less interesting. Xenophon was, however, considered a great historian and wrote on a wide number of topics. The 'Conversations of Socrates' is a compilation of Xenophon's most important Socratic writings, including four of his five Socratic works: Socrates' Defense, Memoirs of Socrates, The Dinner-Party and the Estate-Manager.

The editor of the texts, Robin Waterfield, argues that Xenophon's works are historically significant because it is a perspective other than Plato's on Socrates. Xenophon's Socratic writings show a Socrates from a different perspective and help scholars of ancient Greece have a better impression of who Socrates was. Xenophon's Socrates also has different philosophical positions from Plato's Socrates, such as his interpretations of Socrates' belief that virtue is knowledge: Xenophon's Socrates is more practical and defends his own views more often than Plato's Socrates. But by and large, both Plato and Xenophon characterize Socrates as the great mind who criticized the Athenian social and political system.

The first of the four Socratic works contained in the book is Socrates' Defense, Xenophon's account of Socrates' trial (similar to Plato's Apology). Xenophon primarily covers Socrates' thoughts just prior to his trial, his speeches at trial and his behavior afterward. The work is not a philosophical tract; instead, it is short and feels poorly composed. In fact, it may never have been intended for publication. In the Defense, Xenophon discusses and answers the three major charges against Socrates: not recognizing the gods, introducing new deities and corrupting the young.

The second piece is the Memoirs of Socrates, Xenophon's great Socratic work. It is composed of four books that show Socrates talking with one person after another and sometimes giving speeches. Some of the material in the Memoirs is organized, though much is disjointed and uneven. The major point of the work is to rebut the charges against Socrates. Xenophon uses examples of Socrates' behavior and teachings to show that the charges against Socrates were false. Many consider the book largely fictionalized, as some of its historical errors can be clearly proven. In the work, Xenophon advances what he sees as the Socratic ideal of "true goodness".

The final piece is the Estate-Manager. The piece is a book on both economics and agriculture. Socrates argues that the virtues of the good-estate manager are similar to those of the truly good person. He analyzes the nature of assets with his friend Critobulus and has an extensive conversation with Ischomachus about how to properly run an estate and whether knowledge of how to be a good estate-manager is innate or learned.

More summaries and resources for teaching or studying Conversations of Socrates.