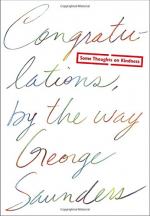 Congratulations, by the Way: Some Thoughts on Kindness Summary & Study Guide

George Saunders
This Study Guide consists of approximately 21 pages of chapter summaries, quotes, character analysis, themes, and more - everything you need to sharpen your knowledge of Congratulations, by the Way.

Congratulations, by the Way: Some Thoughts on Kindness Summary & Study Guide Description

Congratulations, by the Way: Some Thoughts on Kindness Summary & Study Guide includes comprehensive information and analysis to help you understand the book. This study guide contains the following sections:

This detailed literature summary also contains Topics for Discussion on Congratulations, by the Way: Some Thoughts on Kindness by George Saunders.

The following version of this book was used to create this study guide. Saunders, George. “Congratulations, by the way.” New York: Random House LLC, 2014.

Congratulations, by the Way is a slightly expanded and altered version of a commencement speech given by author George Saunders at Syracuse University. The speech was given on May 11, 2013 in address of the graduates of the College of Arts and Sciences. Saunders opens the speech by stating that it is his goal to impart wisdom to the young graduates, as Saunders feels that he has been able to derive wisdom from his years of experience and the many mistakes he has made during his lifetime. Saunders states that while he has undergone many misfortunes and hardships in his life, the only things that he truly regrets are his failures of kindness, meaning times in which he was not as actively kind as he could have been. As an example, he tells the story of a shy classmate he had when he was in the seventh grade. He regrets his failure to be more kind and outgoing towards this classmate, who was generally either teased or ignored.

Saunders goes on to state that certain subconscious states of mind are the main obstacles to achieving a deeper engagement with kindness. These obstacles are the ideas that an individual is more important than others, that an individual is separate from others, and that an individual has any type of true permanency. Saunders points out that kindness is variable, meaning that individuals are kinder at some points in their lives than at others. Thus, a person must maintain faith in the idea that one can improve their average level of kindness towards others. Saunders states education and interpersonal interaction as useful means of increasing one’s kindness and one’s engagement with the world at large. Saunders also states that, as a person ages, they naturally become more aware of the destructive nature of selfish actions and modes of thought, and they therefore willingly engage in acts and outlooks based more on kindness and love towards others.

Saunders then addresses ideas of ambition and the pursuit of personal success. He acknowledges that, on one hand, ambition is necessary, for one cannot improve oneself if one does not believe in one’s own ideas and capabilities. However, Saunders also points out that personal accomplishment is cyclical, and personal ambition can never be fully satisfied. Thus, one must always consider ideas of love and kindness even as one pursues personal goals, for if a person mainly prioritizes ambition, such prioritization will distract from a focus on kindness. Saunders states that even though life is often defined by a gradual process of becoming kinder, one should be as proactive as possible in speeding up that process. Saunders states that kindness is the most important aspect of one’s life, and thus the most important aspect of one’s identity is actually all parts of a person focused not on oneself but on the wellbeing of others.

More summaries and resources for teaching or studying Congratulations, by the Way: Some Thoughts on Kindness.

Congratulations, by the Way: Some Thoughts on Kindness from BookRags. (c)2022 BookRags, Inc. All rights reserved.