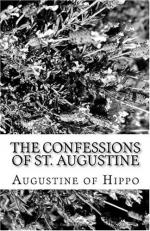 Augustine of Hippo
This Study Guide consists of approximately 45 pages of chapter summaries, quotes, character analysis, themes, and more - everything you need to sharpen your knowledge of Confessions.

This detailed literature summary also contains Topics for Discussion and a Free Quiz on Confessions by Augustine of Hippo.

The Confessions of St. Augustine is the story of Augustine's transformation from a young man driven by ambition and lust to the famous Christian monk, leader, and philosopher. Augustine comes from a humble background. Through his intellectual gifts, he becomes a leading teacher of rhetoric. As he becomes more learned, he wonders how one knows what the truth about God and the world is. In the beginning of Augustine's story, despite the influence of his Christian mother Monica, he is driven more and more into sin. After Augustine faces his shortcomings, he eventually is transformed through his study of philosophy and faith. When Augustine goes to Rome, he is more controlled in his bodily lust, but is even more consumed with a desire for worldly success as a teacher of Rhetoric to rich young men and as a rhetorician. At a certain point, through Augustine's study of secular philosophy, he desires to learn truth and develops a love of truth and philosophy. This begins to make him unhappy with his life and gives him a desire to change it. After learning about the example of the translator of platonic philosophy, Victorinus, and his public conversion to Christianity, Augustine begins to desire to change himself too. Augustine so desires to seek and promote the truth that he is not satisfied with merely being baptized a Christian, but decides to devote his whole life to the church. At first he thinks that this is impossible, but after he hears of the monk Antony, Augustine realizes that he can adopt this way of life as well. Augustine feels that he can best serve the church as a public advocate and teacher, and does not choose to go off into the wilderness to worship God. He and his companions decide to go back to Africa, and on the way his faithful mother passes away.

Even Augustine's struggle to deal with his environment as a baby symbolizes his future struggles in adult life, and the difficulty to know God. As a baby he does know how to speak, and later he cannot know the will of God. Augustine remembers his difficulty to know truth and to know God, and the many errors he fell into. He contemplates the difficulties of adults to comprehend the Christian Scriptures and the wisdom and power of God, like babies learning to talk. When one learns scholastic or other knowledge, one does not know what its use will be later in life. Augustine had to learn many things to become a great debater and theologian. He spends many hours studying the books and theories of the Manichean sect, but later uses this knowledge to argue against that sect and its heretical beliefs. Augustine studies many of the great philosophers of the Greek and Roman world, including Cicero, Plato and the Platonists, and Aristotle. While he finds Aristotle distasteful and a hindrance to his attempts to know God, the Platonists actually help lead Augustine to God.

After Augustine converts to Catholic Christianity, he describes his theology of God as a commentary on the beginning of the Book of Genesis, the first book of the Scriptures. The Confessions is a theological work in two senses. It first of all lays out Augustine's struggles to know God, and then goes through a general theology of the existence of God and an individual's responsibility to him. In Augustine's boyhood struggles to learn how to be a man and his errors that he later views as sinful, many issues are foreshadowed that he faces in adult life. He sees people help him by accident and Augustine wishes to wed deed to intention. In that sense, the Confessions is also a search by Augustine for his own identity as a self-conscious man of God.

More summaries and resources for teaching or studying Confessions.