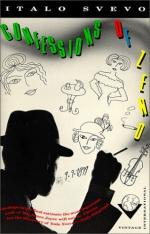 Italo Svevo
This Study Guide consists of approximately 41 pages of chapter summaries, quotes, character analysis, themes, and more - everything you need to sharpen your knowledge of Confessions of Zeno.

This detailed literature summary also contains Topics for Discussion and a Free Quiz on Confessions of Zeno by Italo Svevo.

Zeno is an old man undergoing psychotherapy, and his doctor has asked him to write down his memories in a journal, as part of his therapy. Zeno describes his constant search for health, his fear of death, and his regular attempts to quit smoking. Zeno tries to woo many women, but he ends up with the best of them. When Zeno is an old man and finally can let go of many of his delusions, he is caught up in World War I, which rages around his hometown of Trieste.

Zeno begins his tale with the start of his favorite vice, smoking cigarettes. He starts smoking as a child, stealing pennies or half-smoked cigars from his father and smoking them furiously. Later, his entire life, he marks every event with a Last Cigarette, determined that he is going to quit smoking, right after this cigarette. The death of Zeno's father, Silva, has a major impact on Zeno's life. Zeno never gets along well his father, since Zeno always wants to laugh about things, while his father is serious. One night Silva tells Zeno that he has something very important to tell him, but he can't remember what it is at the moment. That night, Silva has a stroke which leads to his death. As Silva dies, Zeno is holding him down on the bed, as the doctor advised, and Silva slaps Zeno in the face with his last strength.

Zeno is determined to marry Ada, the daughter of his friend Giovanni Malfenti, and so he starts coming over to the Malfenti house every day. Ada rejects Zeno's proposal and so does her younger sister Alberta. When Zeno explains all of this to Augusta, Ada's ugly sister, Augusta agrees to marry him. Ada also gets engaged to a man named Guido. Once Zeno and Augusta are married, Zeno is surprised to realize that he loves her, and she loves him. Augusta is a sweet, submissive wife, and she makes married life very comfortable for Zeno. Soon Augusta is pregnant, and they have a little girl. Zeno quickly finds a girl to be his mistress. Carla is a poor girl hoping to be a famous singer. Zeno is torn by guilt over his betrayal of the woman he loves, but he keeps doing it. Finally Carla marries her singing teacher, leaving Zeno to his wife.

Guido sets up a business firm and gets Zeno to help him run it, with disastrous results. Ada gives birth to a set of twins but afterward develops a disease that robs her of her health and her beauty. She spends a lot of time in a sanatorium, and Guido spends a lot of time with Carmen, his beautiful secretary. As Ada's marriage falls apart, she asks Zeno for help. Guido loses a huge quantity of money gambling on the stock market. In a cry for help, Guido accidentally commits suicide, and Zeno misses his funeral.

Zeno is on vacation with his family when he is separated from them by a platoon of soldiers. It is the onset of World War I, and Zeno lives at a strategic point, on the border of the Austrian Empire and Italy. Zeno's family gets safely out of the area, but Zeno stays in Trieste and actually succeeds at business for once. In his old age, he finally feels that he has gotten healthy.

More summaries and resources for teaching or studying Confessions of Zeno.