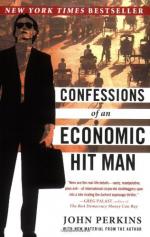 This detailed literature summary also contains Topics for Discussion and a Free Quiz on Confessions of an Economic Hit Man by John Perkins.

Confessions of an Economic Hit Man is the story of a man whose conscience was too strong to let him sleep at night. An economic hit man (EHH) is a man that works to convince foreign countries to accept large loans for engineering or construction projects, such as power plants, highways, electric systems etc..., knowing that the growth of the country will never be great enough to pay back the loan. Countries then default on the loan and are at the mercy of its creditors, usually the World Bank, USAID or the International Monetary Fund. These three creditors, which are not the only ones, are all owned by the United States, whose government can call on these companies to ask indebted nations for favors, such as a U.N. vote, a military base abroad or even oil. This is how the writer and narrator, John Perkins, states is the way the modern empire is conquering the world.

The first few chapters take us through John's beginnings as a young man, from attending an all-boys high school to turning down the Ivy League for his parents and trying to dodge the draft bullet by joining the Peace Corps. Throughout the book he talks about the coincidences that a person goes through that shapes one's life and how once he stepped foot in the corporatocracy, his life's coincidences were no more based on fate, than by the plans of the higher ups that fed off people with his personality traits. He was a hard worker, desensitized to his own feelings and could seal deals by convincing himself that he was the best at what he did. He is given a job at MAIN, a consulting and engineering group, and even though he lacks expertise to create foreign economic forecasts, he figures out a way to do them and do them the way the company needs them to be done—by showing vast economic growth, regardless of the country's situation.

He does this throughout his career, at first believing that he was helping people, but in the pit of his stomach knowing he was doing more harm than good. He spent years justifying his work, assuring himself he was just doing his job and that he wasn't the bad guy. But then, finally, his conscience catches up to him. He quits his job, writes a few books, then in the spirit of Thomas Paine and a few political leaders who weren't scared to go against the establishment, he writes this book, revealing the evil of the economic soldier. This "tell all" book takes the reader through the history of the modern-day empire and how it is shaping the world we live in and at the same time keeping people completely disconnected from reality.