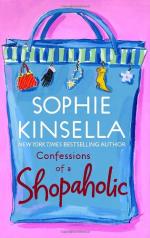 Madeleine Wickham
This Study Guide consists of approximately 35 pages of chapter summaries, quotes, character analysis, themes, and more - everything you need to sharpen your knowledge of Confessions of a Shopaholic.

Confessions of a Shopaholic Summary & Study Guide includes comprehensive information and analysis to help you understand the book. This study guide contains the following sections:

This detailed literature summary also contains Topics for Discussion and a Free Quiz on Confessions of a Shopaholic by Madeleine Wickham.

Confessions of a Shopaholic is the tale of Rebecca Bloomwood and her journey through financial stress and growing up. The novel follows Becky as she tries to find herself among her friends and tries to find herself in the busyness of everyday life. Becky finally is able to find her space, realizing that pleasing others is less important than pleasing herself first.

Becky Bloomwood is a writer for Successful Saving, a financial magazine. Though Becky does her job well enough, exerting as little effort as possible along the way, there is a problem. Becky spends money on anything that catches her eye, and has created substantial debt for herself in the process. Instead of curtailing her spending, Becky finds solace in spending, creating more problems for herself in the process.

Becky Bloomwood spends her days writing at Successful Saving and her spare time shopping to fill a rapidly growing sense of emptiness in her life. Though Becky does not recognize it as such, shopping has become a quick fix for her when things get her down. From the beginning of the novel, it is clear that spending is a problem for Becky. The first chapter finds Becky opening her Visa bill and discovering that she has spent almost seven hundred pounds more than she had thought. As Becky goes over her spending, the rationalization that Becky is able to employ in order to justify her purchases is introduced.

The novel details Becky's desperate attempts to make more money, or save more money, while avoiding the phone calls and letters from the bank and her credit card companies. Becky employs every excuse she can think of, from claiming ill to simply throwing her bills in a nearby dumpster. Becky's schemes to make more money, either by making frames at home, or taking a part time job in a clothing store, also backfire on her, throwing her into a depression that can only be assuaged by more shopping. The entire novel seems to be a vicious cycle.

Becky's personal life is as confusing as her financial state. An attraction to Luke Brandon, a wealthy businessman, seems unlikely to go anywhere. Despite the two spending a wonderful day together shopping, a misunderstanding between the two about Luke's girlfriend leaves Becky feeling a fool, angry at letting herself feel for someone who is out of her league. Becky's sense of self worth directly affects her spending, creating more problems for her as the novel progresses.

Becky's schemes also include dating the wealthy cousin of her roommate, Suze. Suze encourages Becky, though in reality Becky is attracted to Tarquin's wealth and how having a relationship with him would end her financial problems. Though Becky is desperate for a solution, she cannot bring herself to accept money from Tarquin when he tries to make a donation to the fictitious charity that Becky discusses. This shows that Becky is basically an honest person, but one who creates sticky situations for herself when she bends the truth.

Becky's life spins out of control and she runs to the safety of her parent's home where she still cannot manage to tell the truth, instead telling her parents that she is being stalked by Derek Smeath, the banker in charge of her overdraft account. While at her parents, Becky discovers that her casual demeanor has caused the neighbors, Martin and Janice Webster, to lose out on a twenty thousand pound windfall from their investment company. Becky is devastated, realizing that she is responsible for the situation. Calling on an acquaintance from the press, Becky writes an article about the Webster's and Flagstaff Life. The article brings Becky to the attention of Morning Coffee, who would like her to appear on the program. Becky also draws the attention of an angry Luke Brandon, who represents the company.

Becky and Luke appear on Morning Coffee, where Becky, though nervous, states her case in such a way that Luke Brandon changes his views and agrees that Flagstaff has acting badly. Becky performs so well that the producers ask her to accept calls from viewers about their personal finances. Becky is brilliant in the role and is offered a recurring spot on the program. Her joy is short-lived when Derek Smeath appears on the scene, but Becky finally realizes that running from her problems will only make things worse. Becky makes arrangements to meet at the bank and solve her financial problems.

Becky meets with Luke at the Ritz, a business meeting that turns into a wonderful evening where the two talk for hours. The connection that Becky has felt for Luke all through the novel is clear to the reader. At the end of the evening, rather than saying good night, the two spend the night together. In the morning Becky realizes that she is going to miss the appointment with Derek Smeath once again. Rather than run as she always has, Becky acts responsibly, finally becoming the adult that she never thought she would be.

More summaries and resources for teaching or studying Confessions of a Shopaholic.

Confessions of a Shopaholic from BookRags. (c)2022 BookRags, Inc. All rights reserved.