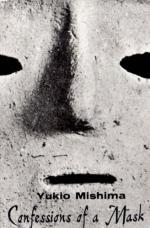 Yukio Mishima
This Study Guide consists of approximately 46 pages of chapter summaries, quotes, character analysis, themes, and more - everything you need to sharpen your knowledge of Confessions of a Mask.

Confessions of a Mask Summary & Study Guide includes comprehensive information and analysis to help you understand the book. This study guide contains the following sections:

This detailed literature summary also contains Topics for Discussion and a Free Quiz on Confessions of a Mask by Yukio Mishima.

Confessions of a Mask tells the story of a Japanese boy growing up in the World War II era. The unnamed protagonist struggles with his homosexuality and grows up isolated and consumed with fantasies of death and sadism. He attempts to create the illusion of normalcy by pursuing a relationship with the sister of the young man he's attracted to. Ultimately, the protagonist ends this relationship, realizing that he cannot have romantic feelings for a woman, but he remains unsatisfied and unfulfilled.

As the novel begins, the protagonist is born to an extended suburban family just before the Second World War. His ill health compels his grandmother to provide a sheltered childhood. He spends most of his time alone, reveling in his childhood fantasies of knights and dragons. An unusual child, the boy is fascinated with death, dying, and people who live "tragic lives". He is already showing signs of budding homosexuality. Nevertheless, he feels the pressure to conform, to behave in the prescribed manner appropriate to his sex and gender. When he witnesses a parade trample his family's garden, he finds himself, for the first time, glorying in destruction for its own sake.

With puberty, the boy's urges take on a sexual component. He now gratifies himself with fantasizes about death, dying, and the male form. Upon seeing Reni's painting of the half-naked and dying "Saint Sebastian", the boy experiences a sexual awakening, masturbating for the first time. At his quasi-military school, where boys nevertheless behave like boys, the young protagonist has his first crush on a schoolyard bad-boy named Omi. While the boy succeeds in befriending Omi, the protagonist ultimately decides that he's too jealous of the older boy's strength and virility to allow himself to love Omi. Now hyper aware of his own inadequacies, the boy resolves to become a man.

The boy, now a man, graduates from school and goes on to college, where, despite the constant threat of Allied bombs, he befriends another young man named Kusano. The young man, desperate to convince himself that he is attracted to women, decides that he has a crush on Kusano's younger sister, Sonoko. Meanwhile, the young man's university sends him to work at a factory that builds fighter planes, a very likely target for Allied bombs. Soon after, the young man is drafted, but thanks to a nasty cold and a few creative lies, he is deemed unfit for service. Kusano, however, is not so lucky. During a visit to Kusano's company, the young man kindles a relationship with Sonoko. The young man is pleased as the relationship escalates over the next few days, but he is also disturbed by a mysterious sense of guilt.

The relationship with Sonoko progresses to the point where she expects marriage. The young man, realizing at last that he can't love a woman romantically, breaks it off. Throwing himself into his studies, the young man's thoughts eventually return to Sonoko. Two years later, he convinces Sonoko to meet with him on a regular basis, just as friends. While this allows him to achieve a certain peace, it soon becomes apparent that he and Sonoko cannot satisfy each other's needs.

More summaries and resources for teaching or studying Confessions of a Mask.

Confessions of a Mask from BookRags. (c)2022 BookRags, Inc. All rights reserved.