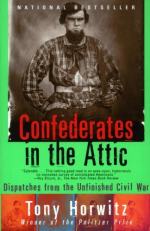 Confederates in the Attic: Dispatches from the Unfinished Civil War Summary & Study Guide

Confederates in the Attic: Dispatches from the Unfinished Civil War Summary & Study Guide includes comprehensive information and analysis to help you understand the book. This study guide contains the following sections:

This detailed literature summary also contains Topics for Discussion and a Free Quiz on Confederates in the Attic: Dispatches from the Unfinished Civil War by Tony Horwitz.

Confederates in the Attic is Tony Horwtiz's personal exploration of the modern fascination with the Confederacy in the American South. Horwitz, who as a child in Maryland had his own fascination with the war, later rekindled his interest as an adult after meeting a group of Confederate reenactors who spent their weekends pretending to be Confederate soldiers. Horwitz plotted out a series of trips to the sites of battles and other historic events in Civil War history where he interviewed local people as well as other "pilgrims" such as himself.

The book is divided into fifteen chapters, organized by state. In North and South Carolina he found people who still recognized the Confederate political flag at meetings and spoke of the day the Confederacy would form again. In Kentucky he followed the trial of a black teenager accused of murdering a white man for waving a rebel flag from his truck and explored how the murdered man was turned into a martyr and celebrity by various southern groups including the Ku Klux Klan. Horwitz also traveled to Tennessee to visit with the novelist and Civil War expert Shelby Foote, then on to the Shiloh battlefield at Foote's suggestion. In Georgia and Alabama, he explored the sometimes similar ways in which the Civil War and the civil rights movements are recognized. In between trips, Horwitz becomes involved with a reenacting group led by the "hardcore" reenactor Rob Hodge, who supplies him with authentic period clothes and leads him on a whirlwind week-long tour of Civil War sites.

Horwitz discovers that the war is a symbol of pride for many Amercans, but for many different reasons. Some, like Hodge, create their own personal identity around the war. Others use it as a source of pride over their own ancestry. The Confederacy and its symbols, such as the rebel flag, represent for many a modern struggle against political and economic oppression. Horwitz finds that race is tightly wound into Confederate symbolism, and he explores alternate viewpoints on the meaning of the war for blacks and whites.

Horwitz examines his own fascination with the war. He is a liberal northerner from a Jewish family whose ancestors had come to America after the war was over. Nevertheless, he was drawn to its story as a young boy, a fascination he shared with his father as a child and then rekindled as an adult after his father retired. A simple explanation, he suggests, is that he wished to get closer to his father, but the war seems to have an even greater pull than would be explained by this. It was a definitive American event and identifying with it is a definitively American phenomenon, perhaps even a unifying force.