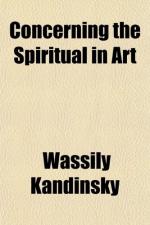 Wassily Kandinsky
This Study Guide consists of approximately 12 pages of chapter summaries, quotes, character analysis, themes, and more - everything you need to sharpen your knowledge of Concerning the Spiritual in Art.

Concerning the Spiritual in Art Summary & Study Guide includes comprehensive information and analysis to help you understand the book. This study guide contains the following sections:

This detailed literature summary also contains Topics for Discussion on Concerning the Spiritual in Art by Wassily Kandinsky.

Art is the expression of the spiritual atmosphere of a certain period. Its form pertaining to its characteristic features evolves from the culture that inspires artistic expression. Copying form, where certain typical elements are imitated, such as that of ancient Greeks, leads only to replication deprived of significance. It is the inner insight that should guide the formation of ideals rather than just the reproduction of forms.

Kandinsky engages the concept of a spiritual triangle that involves various constantly struggling efforts in his view of art and the world. Human striving changes this triangle, although certain endeavors can be misunderstood. Beethoven as part of this triangle achieved the level that few managed to attain, but his genius was only recognized after his death. The advancement of the triangle is only possible through the ability to see beyond certain limits in artistic struggle. As Kandinsky regards true art as part of spiritual life, he considers struggle as most important and compares it to a struggle against sinking.

Vision and struggle makes champions and art can only advance the triangle through exceptional achievements. Progress is vital for the advancement of spiritual world that otherwise regresses. Such stagnation incurs when importance is attached to external success and well-being rather than inner expression.

Music is an art that incorporates various ways of creating spiritual atmosphere. To achieve that, some musicians find inspiration in nature while others may engage external means to achieve certain inner beauty that constitutes the rejection of conventional beauty.

For Kandinsky, the relationship between form and color is particularly important. Their mutual dependence is shaped by the way they influence each other. Color properties, such as its warmth or coolness, stimulate differently, and such influence needs to be considered when combining it with form. Various forms and colors are used in composition in an unlimited number of ways. The expression of an inner feeling is achieved through form. Such expression creates a response in the viewer that can be compared to a vibration. The purity of such vibration grows along with greatness or artistic potential. The experience of the internal structure of form as part of such vibration is possible when compositions are created through with the guidance of an inner feeling.

The most essential part of art involves the element of time, where artistic achievement can reach more than just its contemporaries. The current artistic recognition involves mostly personality and style. The greatest art moves people beyond its current time. Such art can be developed through the inner spirit when inner guidance is applied. Nationality and style become of a lesser value as it is more the mystics of the inner content that matter as they create meaning. External expression helps in searching for meaning.

Among expressions of joy and fear, there are also others that are more subtle and that need to be explored. To achieve that, links between primitive and modern art can be of assistance. Along with new parameters of beauty, conventional beauty incorporates elements that belong to the past. Composition may be enhanced through engaging musical, pictorial, and dance aspects.

Although experimentation is beneficial, certain methods can be dangerous, such as involving the abstract use of color as part of geometrical form and using naturalistic color with concrete form.

Since childhood, Kandinsky childhood was inspired by colors and considered them extremely important. Through his experience of colors he explored smells and sounds in them.

He started painting when he was thirty, teaching at Azbe school in Munich, and then in the Royal Academy. The areas of his interest and exploration involved priming, chemical reactions, tempera, and varnishing.

Kandinsky found most inspiring the art of the tenth and fourteenth century Russian religious art. Apart from his talent, his success was partly due to his attitude of doing everything thoroughly. During the development of his art, he engaged in trends such as realism, French impressionism, and abstract in 1908. In 1910, he made his first work where his painting is detached from the object. His first work that was detached from the object was made in 1910, marking the beginning of the non-objective art.

His first book, Concerning the Spiritual in Art, was written in 1910 and published only in 1912. In this book, he raises various artistic issues while dealing with forms such as squares, triangles, and circles. The revolutionist character of the book involves various artistic possibilities that make art detached from the object while making it also free from dogmas.

The main attributes that pervade his art involve authenticity and personality. He was optimistic in dealing with conflict in his work, which gave inspiration due to the way he approached art.

Kandinsky was eager to explore new modes of creation, using different colors that were mainly simple, and incorporating new things. His art initiated the beginning of a new epoch in painting. The influence of his art led to recognition while his insights allowed for understanding of the issues involved.

His other areas of work involved murals, stage settings, music and banqueting rooms, and panels.

Wassily Kandinsky had many facets of his personality that were mostly familiar to those who knew him. Julia and Lyonel Feininger fondly remember Kandinsky from the time of their friendship with him in Weimer and Dessau. They met him in 1921 in Berlin. Following the devastation created by WWI, creativity was needed. The Bauhaus was founded and its director, Gropius, invited Kandinsky to join.

After the war, Kandinsky lived in Sweden and then went back to Russia. He was teaching at the university in Moscow, from which he resigned in 1921 and started teaching at the Bauhaus. Apart from painting, he also wrote. His work was published in the Blaue Reiter, his biography in Der Sturm, and his book Uber das Geistige in der Kunst, in 1912.

Kandinsky and Feiningers had common friends, such as Alfred Kubin and Maria Marc, whose husband, also a painter, died in 1915. He shared with Feiningers some of his family history in 1922, and explained Mongolian traits in his aristocratic family that were due to the marriage of one of his ancestors to a Tartar princess in the seventeenth century. He studied political economy and law, but upon finishing his studies, he became a painter because of his interest in art.

Feiningers found Kandinsky's personality balanced, poised, and self-controlled. He was full of compassion yet reserved with a sense of humor while being perceptive as a listener. His negotiating skills were admired and utilized during his teaching career, as was his reserve and criticism.

He had the ability to make contact and inspire admiration from students, often offering help when needed. This attitude gave him personal satisfaction. His professional abilities made him critical and engaging, allowing for effective use of teaching methods through constructive criticism. He didn't discriminate between those who were genuine about painting and those only interested in it.

His other areas where he expressed his creativity were writing and music, although he never performed in public. Kandinsky engaged in everything with professional attitude that was genuine and persistent.

He applied in his painting techniques color and the skilled handling of forms without mechanical expression or such that was merely decorative, conveying a vision that made his art universal.

There is an extensive literature written on Kandinsky's work. His contribution is more evident in the implications of his work, where the means of expression makes his art prominent. Kandinsky became recognized at the time of analytic cubism in Pari, and freed painting from the standard representation used in western countries. His creativity was based on the use of imagination with past visual experience.

Traditional visualization imposed certain expectations from the public, while freedom required certain responsibility on the part of the artist. To gain the acceptance of the public, he had to justify meaning and language with every produced art.

Kandinsky abandoned the traditional modes of representation. He achieved that through the over-emphasis at first of the means employed, such as utilized in impressionism and partly in cubism, then using the selected visual material, and finally combining the concept with the final result of work. These developments led to the transformation of his art through his experiences of finding that prepared visual representations were insufficient to creatively express. The final work could not be based on any logical processes.

His inability to become proficient in mathematics encouraged certain admiration for this science as well as geometry. He was unable to instill the superficial order of mathematical means, rejecting various mathematical ways of conveying graphic material.

He incorporated a different order of space than had been accepted since Leonardo da Vinci, eliminating the basal plane and making it continuous in all directions, no longer referred as solid. Previously, a panorama in the shape of the inside surface of a cylinder was accepted. He used various dimensions, perspectives, and superpositions, making color functional but at the same time related to the element that it characterized. The color also involved certain quality. The line was expanded, moved in various dimensions, and incorporated transparency. His use of color that becomes separated from color that is detached from characterizing the element helps to place elements in space.

Kandinsky found similarity between musical and pictorial expression, using hue and color saturation. The relationship between pictorial elements and the space would modify and change the space itself. Through the development of movement as part of a certain direction, motion and space were integrated, giving space with more dimensions.

Traditionally motion was regarded as fixed and being directed towards certain consequence. Kandinsky changed this concept, using motion itself as an element represented and ignoring the cause or consequence of such movement. Various points, traces, or orbits may be represented as part of the movement. Often such movement is also evident through the lack of balance in tension between various forms.

Since 1920, motion becomes suspended and insinuated. Movement engages a certain closed path, various positions with delays in coming back to the original position, and various directions.

Kandinsky mastered the way motion was expressed, acquiring various skills. He managed to gain control of motion in his compositions, being able to employ various means, such as limiting stable or static constructions where various elements showed motion. His exploration of pure color in treating depth was part of such work as Structure of Points, where a rigid construction with a smaller factor of motion is limited, while engaging various frames and forms. A static frame of composition is part of the background where the movement of flow is shown through the rigid element.

In the same way that astronomers estimate the speed of regression through the shifting of color of a star, Kandinsky muted the vibration to active pulsation. His painting showed a gradual change increasing in precision that was also criticized as being too mechanical. Precision used by Kandinsky requires confidence and the ability to depend on creativity.

Kandinsky's reliance on precision made him less inclined towards feelings and thoughts of his time. Certain resemblance in the art of other artists such as the Miro gouache (1941) may suggest that artists borrowed from each other, but in reality they used similar means in the language of their art.

More summaries and resources for teaching or studying Concerning the Spiritual in Art.

Concerning the Spiritual in Art from BookRags. (c)2021 BookRags, Inc. All rights reserved.