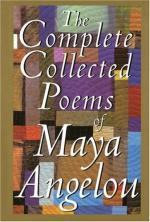 Maya Angelou
This Study Guide consists of approximately 40 pages of chapter summaries, quotes, character analysis, themes, and more - everything you need to sharpen your knowledge of The Complete Collected Poems of Maya Angelou.

Many of the poems have an "everyman" quality, leading the reader into the role of narrator. The tactic serves to personalize the topics of the poems and emphasize the themes. This tactic works well, as the author strives to point out the similarities in all people. By putting the reader into the poem, she shows that all readers share many of the same emotions when put into similar situations.

Some poems seem to speak as a woman; others are more ambiguous. The reader should be careful in assuming the identity of the narrator in each poem. Though the author is a woman, the narrator often appears genderless, which gives the poem a more universal meaning.

Appearing only in the poem by the same name, John J is a man seeking after man vices, due in part to the rejection of his mother.

More summaries and resources for teaching or studying The Complete Collected Poems of Maya Angelou.