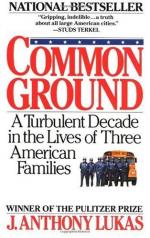 Common Ground: A Turbulent Decade in the Lives of Three American Families Summary & Study Guide includes comprehensive information and analysis to help you understand the book. This study guide contains the following sections:

This detailed literature summary also contains Topics for Discussion and a Free Quiz on Common Ground: A Turbulent Decade in the Lives of Three American Families by J. Anthony Lukas.

The books begins with the assassination of Martin Luther King, Jr. and the immediate effects of the assassination. Colin Diver, who was graduating from Law School, had already accepted a position with a prestigious Washington DC law firm. Like others, he was re-evaluating his position due to the Vietnam War and the King assassination. However both he and his wife Joan felt a commitment to social action. This made him opt out of the establishment. He accepted a position with the mayor's office at half the salary to work on problems of social justice.

Rachel Twymon is a single black mother living on welfare. She has seven children that she is raising alone. A serious health problem keeps her from working for long. She is very upset by the King assassination because her children are roving the streets with the crowds and she tries to keep them at home. Mandatory busing creates more problems for her children. Her children are assigned to different schools as a result of mandatory busing. All she can do is to urge them to avoid trouble.

Alice McGoff is also a single mother. She is white and poor and lives in a housing project in Charlestown. The mandatory busing affected her children. She deals with the issue by putting her three youngest children in Catholic schools. The older children attend Charlestown High School that receives bused children.

Common Ground looks at how these families coped with these issues in addition to everyday life. Each of them is in a different financial position but has to confront the same issues in different ways. Each of them deals with the situation in the best ways they can.

The book is full of history. It describes the history and the development of the different Boston neighborhoods and traces the different family lines.

Common Ground: A Turbulent Decade in the Lives of Three American Families from BookRags. (c)2022 BookRags, Inc. All rights reserved.