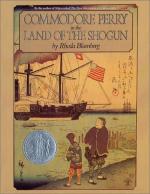 Plot Summary
+Chapters Summary and Analysis
Chapters 1-4, Aliens Arrive, The Black Ships of the Evil Men, His High and Might Mysteriousness, Landing on Sacred Soil (The Audience Hall)
Chapters 5-8, The Dutch Island Prison, Foreigners Forbidden, The Great Peace, Clouds Over the Land of the Rising Sun
Chapters 9-12, The Black Ships Return, The Treaty House, An Array of Gifts, The Grand Banquet
Chapters 13-16, The Treaty, Excursions on Land and Sea, Shore Leave, In the Wake of the Black Ships, Afterword
Free Quiz
Characters
Objects/Places
Themes
Style
Quotes
Topics for Discussion
Order our Commodore Perry in the Land of the Shogun Study Guide

Commodore Perry in the Land of the Shogun Summary & Study Guide

Rhoda Blumberg
This Study Guide consists of approximately 28 pages of chapter summaries, quotes, character analysis, themes, and more - everything you need to sharpen your knowledge of Commodore Perry in the Land of the Shogun.

Commodore Perry in the Land of the Shogun Summary & Study Guide includes comprehensive information and analysis to help you understand the book. This study guide contains the following sections:

This detailed literature summary also contains Topics for Discussion and a Free Quiz on Commodore Perry in the Land of the Shogun by Rhoda Blumberg.

Commodore Perry in the Land of the Shogun is the story of Commodore Matthew Perry, the U.S. Navy Commodore responsible for forcing Japan to open its doors to Western nations not only for culture but for trade. At the time of Perry's arrival, Japan was in its Tokugawa Shogunate period, a period of time where the Shogun had frozen Japanese social norms from its medieval period. Into the nineteenth century, the Japanese had a class-stratified society with incredibly rigid social rules. While their culture flourished, they were technologically not well advanced and were wholly unprepared for the arrival of the Americans. The book explains the details of Perry's meetings with the Japanese, the various features of their deep cultural clash and the ways in which the Japanese ultimately conceded Perry's demands despite the complex social conflicts that arose as a result.

In 1853, Commodore Perry finally arrived in Japanese waters after a journey across the Pacific with four ships, the Mississippi, the Plymouth, the Saratoga and the Susquehanna at his command, two of which were steamboats. The Japanese had never seen such contraptions and were absolutely terrified at the site of them. There had been several American expeditions to Japan in the past but they had failed to establish contact. Only the Dutch had been able to establish trade relations with Japan and the trading conditions were incredibly stringent, with the Dutch trapped on a small island off of Nagasaki with a handful of families who coordinated the trading.

The first Japanese to meet Perry were minor officials who pretended to be officials far beyond their rank. They were desperate to prevent the Americans from landing. Should they fail, they would be forced to commit hari-kari, or Japanese ritual suicide. Perry refused their demands that he leave and pointed his guns towards the nearby town of Uraga and then asked to present the Japanese with a letter from President Millard Fillmore. The letter sent shockwaves through Japanese society, with the advisers to the Shogun interested in opening Japanese society and the Emperor's allies outraged and prepared to fight the Americans. The results of the negotiations were that the Japanese would help shipwrecked American sailors and not treat them cruelly (actually Perry's primary objective) and to establish some minimal trade relations. After leaving for a few months and returning, Perry negotiated the Convention of Kanagawa which lasted for several weeks until finally a treaty was signed. Once the treaty was signed, the Americans were allowed to land at two small village trade sites, Shimoda and Hakodate. The Americans gave the Japanese many fine gifts that shocked and fascinated them. The gifts the Japanese gave in return were treasures of their culture, but Perry and his men thought little of them.

While Perry's methods were aggressive, deceptive and militaristic, the book makes the case that his mission fundamentally revolutionized Japanese society. As a consequence of establishing contact and opening the door for cultural and economic exchange, many Japanese sprung at the opportunity to modernize. Most important among these individuals was Prince Mutsuhito, who followed his father, Emperor Komei, as Emperor of Japan. A new government was formed and the Tokugawa Shogunate was overthrown. In 1868, the Meiji leaders established some democratic institutions, allowed all classes to be part of public affairs, abolished the class system by force of law, and the like. Japan's peaceful modernization was incredible and the author attributes part of the results to the shockwaves Perry sent through Japanese society.

More summaries and resources for teaching or studying Commodore Perry in the Land of the Shogun.

Commodore Perry in the Land of the Shogun from BookRags. (c)2022 BookRags, Inc. All rights reserved.