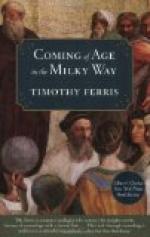 Coming of Age in the Milky Way Summary & Study Guide

Timothy Ferris
This Study Guide consists of approximately 37 pages of chapter summaries, quotes, character analysis, themes, and more - everything you need to sharpen your knowledge of Coming of Age in the Milky Way.

Coming of Age in the Milky Way Summary & Study Guide includes comprehensive information and analysis to help you understand the book. This study guide contains the following sections:

This detailed literature summary also contains Topics for Discussion and a Free Quiz on Coming of Age in the Milky Way by Timothy Ferris.

"Coming of Age in the Milky Way" by Timothy Ferris is fundamentally the history of astronomy and astrophysics. It is also the history of the universe as we know it up to this point in time. What is obvious throughout the book, is that the more man learns the more he knows about the universe and all its creations including himself is how much he really doesn't know. As twentieth physician Lew Thomas put it, "The greatest of all the accomplishments of twentieth-century science has been the discovery of human ignorance." Ferris takes the reader first through early man's reaction to the skies and the stars. Someone even as brilliant and learned as Aristotle thought there were two realms of the skies. His hypothesis was that there was a realm below the moon and one above it and that there was no great beyond because virtually nothing existed beyond it. To Aristotle, the stars were stationary objects in the upper realm.

Copernicus and Galileo adapted the theory that the earth was not the center of the universe that it was instead the sun that the earth was subservient to. There were such religious objections to such a theory that Copernicus was reluctant to share his theories and Galileo was arrested by the clergy for advancing them. The stories of these early astronomers is captured in Ferris' narrative as part of the story of man's relationship with the universe. He describes the struggles they had with other scientists, governments and the clergy. The book takes the reader through the advancements of modern classical physicists like Newton and Einstein who both changed the science forever and how mankind was positioned in the vast expanse of the universe.

Ferris describes how man sought answers to the mysteries of the universe right here on earth. Digging down to the strata, earth revealed just how old it was, once again arriving at a critical turning point in which science was conflicting with religion. The the ages of rocks verified through scientific carbon dating that the earth was much older than what was recorded in the Bible. But earth revealed much more than just its age. It uncovered important data about the universe. Scientists learned from Darwin's work that the elements that existed on earth and created life were those same elements that existed everywhere in the universe. Man's connection to the earth and the universe was without question.

The author takes the reader into the mysterious world of quantum physics where further evidence is provided that man is connected to the universe at its most miniscule and infant stages as evidenced in advancements made in the subatomic world. Modern physics proffers theories about how it all began and how the universe was created. But even at the conclusion of this coming of age story about mankind, there are more questions than answers. But there is hope that the intelligence of man will some day reverse the story's ending.

More summaries and resources for teaching or studying Coming of Age in the Milky Way.

Coming of Age in the Milky Way from Gale. ©2005-2006 Thomson Gale, a part of the Thomson Corporation. All rights reserved.