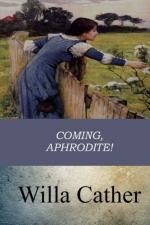 Related Topics
A Lost Lady
Death
Death Comes for the Archbishop
My Antonia
Neighbor Rosicky
One of Ours
O Pioneers!
Paul's Case
The Diamond Mine
The Professor's House
The Song of the Lark
Willa Cather
Youth and the Bright Medusa
Sapphira and the Slave GIrl
Lucy Gayheart
A Wagner Matinee
The Sculptor's Funeral

Willa Cather
This Study Guide consists of approximately 22 pages of chapter summaries, quotes, character analysis, themes, and more - everything you need to sharpen your knowledge of Coming, Aphrodite!.

The following version of this story was used to create this study guide: Cather, Willa. “Coming, Aphrodite!.” Youth and the Bright Medusa. Aegypan Press, 2007. Pages 11 – 44.

The story takes place in New York City. Don Hedger is a painter who lives in an apartment near Washington Square. Don is often very experimental in his artwork. He contentedly lives an isolated life with only his dog for company. One day, a woman moves into the adjacent apartment. She is a beautiful 20-year-old woman named Eden Bower. Eden and Joe clash at first. When Eden sees Joe washing his dog in the communal tub, she scolds and insults him. Joe then develops a further dislike for Eden. One day, he discovers a hole in the back wall of his closet that looks in to Eden’s apartment. He looks through the hole and sees Eden naked and doing stretches. Don quickly develops an infatuation for Eden.

One day, Don follows Eden to a city square and approaches her. They converse amicably. Eden says that she wishes to be a professional singer and that she will soon move to Paris to study there. Back at the apartment, Don shows Eden some of his paintings, and then they go out to lunch together. The narration states that Eden is originally from a rural town in Illinois, but she wanted to be a singer from a young age. She aspires to be rich and famous. Her most recent suitor is a millionaire from Chicago who is bankrolling her lodging and expenses while she stays in New York City. Eden is very outgoing and social. One day, Don and Eden go to Coney Island together. There, an acquaintance of Don’s named Molly performs an act where she hangs from a trapeze on a hot air balloon. For the second show, Molly lets Eden perform the act in her place. Don is angry at Eden for doing something so risky, but he soon forgives her. They return to the city and go to dinner together, now feeling more intimate with each other.

While at dinner, Don tells Eden a story that inspired one of his paintings. The story is a folk tale from Mexico about a princess whose presence brought rain and fertility in the land. She marries the king of the Aztecs, but the king soon kills her after discovering that she has been sexually unfaithful to him. Eden is upset by this story and believes that Don is trying to antagonize her. Back at the apartment, they reconcile. Soon after, they begin a romantic relationship with each other. However, they experience friction in their relationship when Eden urges Don to focus on creating more accessible works so that he can gain money and renown. Don says that the only success he cares about is pleasing himself with his artwork. There is a break in their relationship, and Eden soon relocates to Paris. Don immediately misses her, and Eden leaves a note saying that she will never forget Don. Years later, Eden has gained considerable fame as a singer, although her busy career is quite demanding and tiring. She is glad to learn that Don has gained a certain amount of renown as a painter.

More summaries and resources for teaching or studying Coming, Aphrodite!.