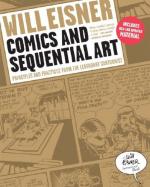 Will Eisner
This Study Guide consists of approximately 25 pages of chapter summaries, quotes, character analysis, themes, and more - everything you need to sharpen your knowledge of Comics and Sequential Art.

An influential journalist and editor, Cousins is quoted as saying, "sequential thought is the most difficult work in the entire range of human effort," Cousins suggests the care the creator of a comic must exercise in foreseeing how the reader/viewer will react to his/her work.

The original "Renaissance man," artist, scientist, and inventor, da Vinci is held up by Eisner for his "vain" efforts to make a science of art.

A nuclear physicist whose Special Theory (Relativity) declares that time is not absolute but relative to the position of the observer, is used by Eisner to explain how panels (or boxes) are used to move a reader/viewer through a comic strip.

The author of Comics & Sequential Art, Will Eisner, is an acknowledged master of comic book art and one of its earliest creators. He studies under the...

More summaries and resources for teaching or studying Comics and Sequential Art.