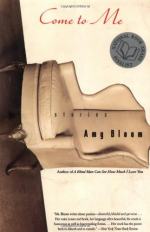 Come to Me Summary & Study Guide

Amy Bloom
This Study Guide consists of approximately 47 pages of chapter summaries, quotes, character analysis, themes, and more - everything you need to sharpen your knowledge of Come to Me.

Come to Me Summary & Study Guide includes comprehensive information and analysis to help you understand the book. This study guide contains the following sections:

This detailed literature summary also contains Quotes and a Free Quiz on Come to Me by Amy Bloom.

The next story, titled, "Song of Solomon", tells the story about a young, single mother of a newborn baby who is preparing to “accidentally” run into her doctor, Dr. Sheldon, at the Jewish synagogue he attends, even though she is not Jewish. She is hoping to get his attention and make him fall in love with her.

In "Sleepwalking" Julia Sampson is married to Lionel Sampson who has a son, Lionel Jr., nicknamed Lion, from a previous marriage. Lion is 19 years old and had become Julia’s stepson 12 years earlier. Lionel and Julia have a son together as well, Gabriel Tyner Sampson, nicknamed Buster, who is still in elementary school. After Lionel’s death, the grieving family leaned on one another until the contact became too personal. One night when Lion and Julia were both feeling sad, Lion climbed into bed with her for comfort. He has sex with her, and she is a willing participant. After that, she realizes the mistake she has made, breaks his heart, tries to send him away, but he doesn’t leave and becomes disrespectful and hard to handle until he returns to school out of town. Lionel’s mother, Ruth, is shocked at her grandson’s change in attitude and personality, though she does know the reason why. After Lion leaves, Julia and Buster continue their lives normally.

"Hyacinths" depicts a boy named, David, who does not lead a happy life, and probably, the worst day of his life is his sixth birthday. His father, Walter, is a cold, cruel man, and his mother passed away while he was young. He is lucky to have the support of his father’s brother, Francis, and two sisters, Ida and Myrtle, as well as the support of his mother’s brother, Hiram, and sister, Ruth. On David’s sixth birthday, his father gives him a calf to take care of on his own. When his cousins arrive to have dinner and cake, the oldest boy, Willie, is impressed by the calf, but begins touching Walters’s tools and eventually gets into his gun cabinet. David tells him that he shouldn't do that, and when they grab the gun to put it back, they both slip in the mud, and Willie is shot in the chest and killed. David’s father beats him, but Ida takes him away to rescue him and put him in bed. Once in bed, Walter goes into David’s room with a gun to shoot him, a sort of an eye for an eye kind of thing. Walter’s brother, Hiram, won’t let him hurt the boy and takes David back to Duluth, MN with him and his wife, Fritzi.

After living there happily for a while, David receives a note from Walter saying that he's coming to pick him up. David asks Hiram if he can become Jewish like him. The story then jumps to David as an adult, married to Galen with daughters Violet and Rose. He is taking them back to his hometown in Rosebank, to show them where he was born. Stopping at a motel outside of Rosebank on the night they arrive, Galen, Violet, and Rose get in their swimsuits and go to the unlit pool. When David goes outside he hears Rose screaming, jumps in the pool, and saves an almost unresponsive Violet. Galen walks up after the event asking what happened. David is mad at her. He looks up and believes he sees the ghost of his cousin Willie, still as blood as they day he was shot, telling him he was lucky this time.

In the story, "The Sight of You" the reader learns that Galen is married to David, but she has a crush on Henry who is also married. After a lot of quick interactions here and there, Galen agrees to leave her husband for Henry. Unfortunately, Henry wants much more than just an on-going affair. He wants to get married. Galen does not want that kind of commitment, so before breaking it off with her husband, she tells Henry she’s changed her mind.

The story, "Silver Water" is a story about a family whose daughter, Rose, has a mental breakdown. She starts off like any other kid, but somewhere along the way, she has a psychotic break. The family’s ups and downs, laughter and tears, happiness and…mostly sadness... are all spelled out in various ways as the family interacts with each other, with Rose, and with her varied therapists over the years.

This story is a continuation of the story “The Sight of You”, but is titled, "Faultlines". This one focuses on Henry and Marie in their new home. Henry, of course, is still looking around for an affair. He is attracted to a girl in the office, Mary, who is not married, but living with a man, Nathan. He invites them over to have dinner with them, knowing that Marie will not like it at all, because Mary is blonde and beautiful. Although Mary flirts with Henry at the office, by the end of dinner, she likes Marie so much, she can’t think of having a fling with Henry. As Mary and Henry are walking back into the house from the garden, Mary’s heel is caught, and she stumbles. Henry catches her, and despite what she has just decided, she ends up kissing Henry, anyway.

"Only You" involves Marie and Henry, but this time, Marie is focusing on herself and not on whatever Henry is doing. She decides to make changes to her appearance with the help of a hairstylist named Alvin. She starts working for Alvin as his assistant. When they go to a conference together, she learns that Alvin is a transvestite, but that he likes her, too. The story ends with them going to bed together.

"Light Breaks Where No Sun Shines" features Susie, a lonely, overweight young girl, who is picked on at school and hounded by an unsympathetic mother at home. She makes friends with one of her neighbors who happens to own a fur store. They begin a weekly habit of going to his closed store, Susie undressing, and trying on furs. When Mr. Klein abruptly, and it seems reluctantly, ends their weekly ritual, Susie is extremely upset. She bounces back when her fur filled afternoons are replaced with piano lessons, and she falls in love with her teacher.

"Semper Fidelis" is the story of a young woman of 18 who marries a much older man of 50. They have been together for ten years when the story opens, and now Max, her husband, is dying of cancer. Although he is dying, he is still insisting on watching his young wife undress, claiming to be having an affair with his nurse, Dawn, and bringing up past affairs he’s had since they’ve been married. Because she needs a break, she goes out shopping every Thursday night…first the mall, then the grocery store. She leaves the house in jeans and tennis shoes, but changes into sexy clothes before shopping, then changes back before going home again. She has her eye on Ray, the deli man at the grocery store. Although she’s never done anything to act on her attraction, they exchange flirty smiles when she goes in.

"When the Year Grows Old" is a story about a young girl, Kay, whose mother has a mental breakdown, acts in mysterious, unfamiliar ways, and must be hospitalized for a time while Kay stays home with her distant, harsh father.

"Psychoanalysis Changed My Life" begins with a patient, Dr. Marianne Loewe, who is visiting her psychiatrist, Dr. Zurmer. However, as the psychiatrist begins to collapse, she asks the patient to drive her home. Marianne takes her home, places her in her bed, and calls to check on her daily. The older woman asks Marianne to visit her at her home because she’s too sick to go to the office. As they talk, they become more than doctor and patient; they become friends. In the end, the lonely Marianne is introduced to the Dr. Zumer's single son, Alex.

More summaries and resources for teaching or studying Come to Me.

Come to Me from BookRags. (c)2022 BookRags, Inc. All rights reserved.