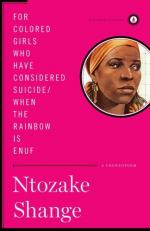 Ntozake Shange
This Study Guide consists of approximately 48 pages of chapter summaries, quotes, character analysis, themes, and more - everything you need to sharpen your knowledge of for colored girls who have considered suicide/when the rainbow is enuf.

for colored girls who have considered suicide/ when the rainbow is enufis a choreopoem, a poem (really a series of 20 separate poems) choreographed to music. The performers dance the poems as well as narrate the lines. These are not poems set to music with accompanying dance steps, but an integration of movement, gesture, and music that together comprise the choreopoem. Improvisation is central to the choreopoem, allowing the performer to adjust the performance to her own mood and that of the audience. Shange invented this medium as a way to produce a new space for the expression of black culture, a medium that would not be judged by the stifling conventions of European and American theater because it defies definition.

As the title of the choreopoem implies, the rainbow is a predominant symbol in the play, one consciously applied to the ladies' costumes, which are the colors...

More summaries and resources for teaching or studying for colored girls who have considered suicide/when the rainbow is enuf.

for colored girls who have considered suicide/when the rainbow is enuf from Gale. ©2005-2006 Thomson Gale, a part of the Thomson Corporation. All rights reserved.