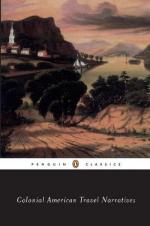 Various
This Study Guide consists of approximately 31 pages of chapter summaries, quotes, character analysis, themes, and more - everything you need to sharpen your knowledge of Colonial American Travel Narratives.

"Colonial American Travel Narratives" is a collection of four pieces of writing by colonists living in America between 1675 and 1744. The narratives give a cross section of perspectives from people of different backgrounds writing at different points in America's colonial history. They also provide insight into the ways in which colonial society changed over this time period as settlement, trade and religious ideas expanded.

In an introduction entitled "Mapping American Life," editor Wendy Martin provides historical context for the four narratives, relating the changes that took place as the colonies moved from a largely rural society to one with increasingly larger commercial centers and towns. She also charts the changing nature of travel as an affluent class of colonials emerged.

The first narrative in the collection is that of Mrs. Mary Rowlandson who was taken captive in 1675 by a band of Native Americans who raided the village of Lancaster in Massachusetts. Rowlandson traveled through the wilderness for eleven weeks, led by her captives. She witnessed their daily life. Finally, Rowlandson was ransomed by her husband and returned to her family. Her narrative is presented as an ordeal of faith, and she describes her trials in deeply religious terms of God's will.

The next narrative in the collection is by Sarah Kemble Knight, a Boston business woman in the early 1700s. Knight travels from her home in Boston to New Haven, Connecticut, where she helps a relative with some business matters, then proceeds on to New York where she stays for a time before returning to Boston. Knight's account of her travels are amusing and entertaining and provide the perspective of an intelligent and savvy woman traveling through largely rural America. Knight has a quick wit and describes the small obstacles faced by a woman traveling alone with humorous detail.

The third narrative is called a "Secret History of the Line," by William Byrd II, a wealthy Virginian who is appointed to lead a commission of surveyors to map the border between Virginia and North Carolina in 1729. Byrd gives an earthy account of the hard-drinking and sometimes belligerent behavior of the band of men who set out with him. Written for private circulation, the "Secret History" includes personal details that Byrd left out of his official report.

The final narrative in the book is that of Dr. Alexander Hamilton, a physician who was born and educated in Scotland and England. He moves to Annapolis Maryland to practice. Traveling purely for leisure, Hamilton wanders through the northern colonies making observation about the gentlemen and ladies that he encounters with several pithy and witty remarks about the differing people and customs in the north country.