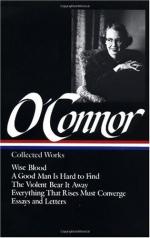 Flannery O'Connor
This Study Guide consists of approximately 32 pages of chapter summaries, quotes, character analysis, themes, and more - everything you need to sharpen your knowledge of Collected Works.

The story "Wise Blood," begins with Haze Motes riding a train to his hometown. Motes has just been released from the army after four years and is eager to return home. The only thing Motes wants is to become a preacher like his grandfather. However, Motes has a peculiar way of looking at religion and has little reverence for Jesus.

Once Motes reaches the town of Eastrod, he discovers that much has changed in the time he was gone. The old homestead is little more than a shell; the only thing left is an old shifferrobe in the kitchen. Motes wanders aimlessly through the town and finally settles in at a boarding house with a single, older woman. For the first time, Motes sleeps with a woman although he still declares himself to be free from sin.

(read more from the Part One Summary)

More summaries and resources for teaching or studying Collected Works.