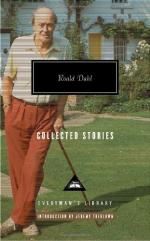 Roald Dahl
This Study Guide consists of approximately 38 pages of chapter summaries, quotes, character analysis, themes, and more - everything you need to sharpen your knowledge of Collected Stories.

This detailed literature summary also contains Topics for Discussion and a Free Quiz on Collected Stories by Roald Dahl.

Stuffy, Stag and William are three RAF pilots who go into Cairo on a forty-eight-hour leave from combat in Libya looking for women. They encounter Madame Rosette, an exploitative and predatory whorehouse operator who keeps her "girls" in near-slavery. The three soldiers are outraged at the injustices perpetrated on the young women forced to sell themselves to survive. Instead of buying their services, the men decide to lock Madame Rosette in her office and to let the prostitutes escape her clutches. They buy the women drinks and then carry them each home in rented horse-drawn carriages. All three are rather simple yet honest young Brits whose sense of injustice is stronger than their lust or the effects of alcohol.

Lionel Lampson is a British aristocrat who fancies himself a true citizen of the world, a sophisticate and art collector, a ladies' man and a dashing fellow. He becomes silently enraged when one of his social acquaintances, Gladys Ponsonby, tells him that the woman he's been dating, Janet de Peagia, thinks him a crashing bore. Cunningly, Lionel arranges with a popular artist to paint Janet in his usual manner: first a nude, then a fully-clothed figure. Lionel then washes off the top layers of paint with a solvent to reveal a nude Janet. He invites his friends to a special dinner party, where he suddenly and shockingly reveals the nude portrait. By this time, he's already fled for a "vacation." Upon his return to London, Lionel learns his friends are not amused; they think him a creep. He feels even worse when he gets a forgiving note from Janet.

Carlosappears in Man from the South (Chapter 13)

Carlos is the strange, sadistic old man of uncertain South American origin who enjoys making bets that permit him to chop off a finger of his opponent if he is victorious. Carlos offers to bet a shiny, sleek new Cadillac that a vacationing soldier in Jamaica can't get his cigarette lighter to fire ten times in quick succession. Just as the venal old man is about to chop off the soldier's pinkie, his wife enters their hotel room and screams at him to stop. She tells the soldier that her husband has made a lifetime habit of making such bets; the Cadillac belongs to her and is not even his to give away.

Klausnerappears in The Sound Machine (Chapter 15)

Klausner is a sound engineer, "a frail man, nervous and twitchy, with always moving hands," who builds in his tool shed a device that can detect and amplify sounds from plants. For example, when a rose is clipped in a nearby garden, the machine registers a high-pitched scream. Scoot, his physician friend, drops by one evening and Klausner asks him to help with an experiment. He chops a tree with an axe, the machine picks up a great roaring sound of pain, and a giant branch falls crushing his machine. Klausner feverishly demands that the doctor paint the wound with iodine, as the physician tries to calm his nerves.

Mr.Botibol is a tall, thin man with no shoulders who inherits a piece of commercial property. In the process of selling it, he confides to his attorney that he has, at the age of fifty-eight, never known a single success in his life. But Mr. Botibol has a secret outlet—he "conducts" classical music over the radio. Soon be buys a conductor's wand, black tails, and has a mini-concert hall built in his home where he can conduct. He meets a young woman at a music store and invites her to dinner; he then shows her the concert hall complete with a piano whose keys produce no sound. She goes along with his fantasy and "plays" the piano while he "conducts" the orchestra to recordings over loud speaker. She then reveals that she is a music teacher, and Mr. Botibol's fantasy world is quickly shattered.

Adolph Knipe is a computer nerd and an inventor who has a secret desire to become a writer. After many failed attempts to sell a magazine story, he invents a machine that can write stories on demand tailored to each magazine. Using fictitious names, he floods magazines with the computer-written stories and they sell like hotcakes. He offers large sums of money to established writers in exchange for using their names on his stories. Knipe corners the market in fiction writing and the narrator, a struggling writer who has been approached by Knipe, asks at the end for the integrity to starve his children—if need be—to succeed by his own talents and efforts.

Mr. Botibol appears in Dip in the Pool (Chapter 21)

The hapless Mr. Botibol makes another appearance, this time on an ocean liner where he schemes to win the $7,000 daily pool where passengers bet on the actual speed and location of the ship. When it appears that his miscalculation will cause him to lose, he jumps overboard in hopes of delaying the ship. But he slips away in the sea and is forgotten. In both manifestations, (Chapter 16 and Chapter 21), Mr. Botibol is a stereotypical loser whose attempts to become real fail because they are based on deception and manipulation of others.

Arthur Beauchamp appears in My Lady Love, My Dove (Chapter 24)

Arthur Beauchamp is a mild-mannered butterfly collector who is persuaded by his wife, Pamela, to rig up a microphone in their guest room so they can eavesdrop on their weekend guests. They hear the couple fighting over how they lost a card game to their hosts. As the guests go over their catalogue of tricks to relieve the Beauchamps of their money, Pamela and Arthur listen intently and learn all of their tricks so they can't be duped again.

Mary Maloneyappears in Lamb to the Slaughter (Chapter 26)

Mary Maloney is the pregnant wife of a policeman. Her husband comes home from work one day and tells her he is leaving her. Suppressing her emotions, Mary asks him to stay for dinner anyway, and while he is sitting at the kitchen table, she takes a frozen leg of lamb from the refrigerator and bludgeons him to death. She then goes to the local grocery story to pick up a few items to provide herself with a cover story, and puts the lamb in the oven. When police detectives arrive, she serves them the lamb as they ponder what the murder weapon could have been.

Bruce (Galloping) Foxley is the name of a preparatory school boy who once made life hell for William Perkins, who now commutes on the same train every day to his job in London. Perkins notices another passenger who he is convinced must be Foxley, the bane of his youth. In his mind, Perkins relives the torture and abuse of his school days at the hands of the sadistic bully Foxley. Perkins determines to introduce himself, which he does. The other man does likewise, but he is not Foxley.

Cyril Boggis is a shrewd London antique dealer who travels through the countryside of England searching for undiscovered and highly-valued pieces that he can buy cheap and sell for a huge profit in the city. He dresses in a clergyman's robe and drives to the smaller rural towns on Sundays, looking for hidden treasures. This form of a swindle provides Boggis with a comfortable living, and one day he comes upon an extremely valuable piece of furniture in a farmer's barn. He offers the farmer a pittance, telling him he only wants the legs from the cabinet. Trying to be helpful, the farmer and his friends chop off the legs and smash the rest of the antique into firewood.

The Colonelappears in Mrs. Bixby and the Colonel's Coat (Chapter 33)

Identified only as "the colonel," he is the man who as a longstanding affair with Mrs. Bixby, the wife of a dentist in New York City. When he breaks off the affair, he gives her a mink coat that becomes the focus of this story of double betrayal.

Oswald Corneliusappears in The Visitor (Chapter 39)

Oswald Cornelius is the British aristocrat who drives his sports car through the Sinai Desert and encounters a wealthy Arab with a magnificent mansion, a wife, and two daughters. One of the daughters is beautiful, while the other is a leper who is hidden away in her room.