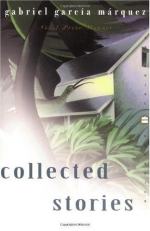 Plot Summary
+Chapters Summary and Analysis
The Third Resignation
The Other Side of Death
Eva is inside her Cat
Bitterness for Three Sleepwalkers
Dialogue with the Mirror
Eyes of a Blue Dog
The Woman Who Came at Six O'Clock
Nabo: the Black Man Who Made the Angels Wait
Someone Has Been Disarranging These Roses
The Night of the Curlews
Monologue of Isabel
Tuesday Siesta
One of These Days
There Are No Thieves in This Town
Balthazar's Marvelous Afternoon
Montiel's Widow
One Day after Saturday
Artificial Roses
Big Mama's Funeral
A Very Old Man with Enormous Wings
The Sea of Lost Time
The Handsomest Drowned Man in the World
Death Constant Beyond Love
The Last Voyage of the Ghost Ship
Blacaman the Good, Vendor of Miracles
The Incredible and Sad Tale of Innocent Erendira and Her Heartless Grandmother
Free Quiz
Characters
Objects/Places
Themes
Style
Quotes
Topics for Discussion
Order our Collected Stories Study Guide

Gabriel García Márquez
This Study Guide consists of approximately 49 pages of chapter summaries, quotes, character analysis, themes, and more - everything you need to sharpen your knowledge of Collected Stories.

This detailed literature summary also contains Topics for Discussion and a Free Quiz on Collected Stories by Gabriel García Márquez.

Gabriel Garcia Marquez is a fabulist, a sorcerer with language whose surprising and potent imagery and characters impel the reader from one story to another in this collection that spans 1947 to 1972. One of the benefits of this collection is that the reader sees the development and maturation of a most amazing literary talent from his earliest days to his award of the Nobel Prize for Literature in 1982. Garcia Marquez' earliest stories are strange metaphysical creations that seem to occupy a place somewhere between the living and the dead, where time is relative and past, present and future coexist. The influence of Edgar Allan Poe is apparent in stories that concern death, decay and transfiguration. Except that Garcia Marquez, unlike Poe, has access to modern theories of physics and notions of time/space that the melancholy Richmonder lacked. Garcia Marques artfully exploits some of these ideas in his early stories without resorting to science fiction genre writing. Another strong influence on Garcia Marquez as a writer is Franz Kafka, particularly his surrealist "Metamorphosis."

Garcia Marquez' style of writing has been characterized as "magical realism," a fluid way of communicating in which the ordinary and the completely improbable coexist quite comfortably. This approach has been traced to a youth spent in Aracata, Colombia with his maternal grandparents where the writer listened to fantastic tales, folk beliefs and superstitions from his grandparents as well as the local residents. Adding to this taste for the supernatural, the young Garcia Marquez was often taken by his grandfather to circuses where he marveled at the strange creatures and began to develop a sense of the everyday world as strange and unpredictable. Another literary influence in Garcia Marquez' early development as a writer was Faulkner, with his cryptic but engaging story-telling style, malleable sense of time and bizarre characters.

The evolution of his art takes Garcia Marquez past his early experiments where the influence of his literary models, as well as his life models, are evident to his more mature writing in which he finds his true voice to create unusual but fully human characters with many dimensions, as well as story lines that do not require so much a willing suspension of disbelief as a complementary imagination supported by a child-like curiosity. It is this more mature style that shows itself in Garcia Marquez' later short stories as well as in his novels, "One Hundred Years of Solitude" and "Love in the Time of Cholera."

Shortly after beginning his career as a fiction writer Garcia Marquez became a newspaper journalist for El Heraldo in Barranquilla, Colombia. He worked for a series of newspapers in his native country and in Mexico, Cuba, Venezuela and the United States while also writing his novel and stories. He once told a reporter that he always considered his true profession to be that of journalist. That may well be the case, and his short stories may be missives from the dark back country of the mind that most people would rather not visit—a place that offers little certainty but much enchantment.