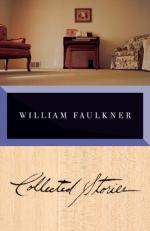 William Faulkner
This Study Guide consists of approximately 38 pages of chapter summaries, quotes, character analysis, themes, and more - everything you need to sharpen your knowledge of Collected Stories of William Faulkner.

This boy, often called Sarty, is the main character from the story "Barn Burning." This young boy is caught between his fidelity for his father and his knowledge of the truth. Sarty has traveled with his family from home to home after they have been forced to leave because of his father's anger and need for vengeance. After he witnesses his father's actions at de Spain's home, Sarty realizes what is happening. He turns against his father and informs de Spain his barn will be burned. Sarty hears shots and believes his father has been shot. Sarty leaves his family that night and does not look back.

Res Grierappears in Shingles for the Lord

Grier is the main character from the story "Shingles for the Lord." Grier is portrayed as a poor farmer who cannot even afford to own his own tools. He is forced to borrow them from neighbors. It appears the most valuable thing Grier owns is a hound dog, and he only has half interest in the dog. In his attempt to get the better of the two men who are working on the church with Grier, he accidentally burns the church to the ground. As a result, the preacher labels Grier as an arsonist. Grier indicates, however, he plans to help rebuild the church despite the preacher's harsh labeling.

Mr. Pearsonappears in The Tall Men

Mr. Pearson is an investigator with the war draft board in Jackson. He has been sent to arrest boys Anse and Lucius for not signing up for selective service. Mr. Pearson begins with the idea that the boys are trying to avoid the draft and might even run away to avoid being arrested. After he learns the story of the boys' family and listens to the marshal talk about their family values Mr. Pearson begins to understand the boy's weren't avoiding the draft at all. Although this man is referred to by his given name once in the story, he is most often simply called the investigator.

Ratliffappears in A Bear Hunt

Ratliff is the main character from the story "A Bear Hunt." He is employed as a sewing machine salesman who apparently joins a group of men on the hunt for a bear. Ratliff's claim to fame is his suggestion to Provine that he go to an old Indian mound to cure his hiccups. A man who once had property burned by Provine overhears Ratliff's suggestion and decides to take Provine's Indian mound experience to the extent. Ratliff gets a beating for his innocent suggestion.

Major de Spainappears in Shall Not Perish

Major de Spain is a minor character in many of Faulkner's short stories. One of the ones in which he stands out in is "Shall Not Perish." It is in this story he depicts the grief of an entire country as he mourns the death of his son. He is the richest man in Jefferson. Although he is called "major" he is not actually in the Army. He makes his living as a banker. He is also a powerful politician. He carries the nickname major because his father was a major in the Confederate War.

Emily Griersonappears in A Rose for Emily

Emily Grierson is a peculiar lady who lives in an old Victorian style house in Jefferson. As she ages Emily leaves her house less and less yet she is well-known to all who live in Jefferson. One of the last times she was seen, she had become an overweight elderly lady who walked with the aid of a cane. As a young woman, she is described as being attractive but haughty like the rest of her family. There is also a history of mental illness in Emily's family. She never marries although members of town had high hopes she would marry the northern paver who courted her.

Hawkshaw is a man living in a dream world to fulfill a promise. On her deathbed Hawkshaw's fiancee asks him to take care of the mortgage on her parent's house, a request which he honors. It seems that once this mortgage is paid off he feels free to pursue his own desires. Since his fiancee's death he has been traveling around until he decided to stay in a little town where he has an unusual interest in a little girl with hair the same color as his fiancee's. After the mortgage is taken care of, Hawkshaw marries this girl.

Ginsfarb is the stunt jumper who plays a role in the story "Death Drag." He is described as a short man who walks with a limp and talks with unusual diction. Ginsfarb's greed causes his stunt pilot to suffer with a nervous condition. Ginsfarb refuses to smoke cigarettes because he sees the act of smoking as burning money. He also scolds the pilot when he "wastes" gas in order to save Ginsfarb's life during one jump that goes bad.

Once addicted to morphine this druggist is known for filling few prescriptions. He is well-known by the children in town for his odd tasting ice cream and dirty windows. A few Christians take it upon themselves to help Uncle Willy kick his morphine habit. He turns from morphine to alcohol and marries a whore he meets in Memphis. The most outstanding aspect of Uncle Willy's life is his ability to have fun. This ability impresses the young narrator of the story who runs away with Uncle Willy in order to get to know him better. Ultimately, Uncle Willy dies when he crashes the airplane he was trying to fly.

Uncle Rodneyappears in That Will Be Fine

Uncle Rodney is Georgie's uncle from the story "That Will Be Fine." The adults believe Rodney is a lazy man who bums off his father. Georgie, on the other hand, has inside information on the real business that Rodney does although he doesn't understand this business. Rodney seems generous, giving gifts he can't afford as well as money to his nephew. Instead of being a lazy bum, Rodney is actually a scam artist. In the instance recorded in this short story, Rodney takes bonds from his work place then "pays" for them with a stolen and forged check. It is assumed Rodney is killed because of his fraudulent business.

Wash is the Grandfather of Milly in the story "Wash." Wash is probably what would be considered poor white trash in the culture of the old south. He does not go to war with the owner of the plantation on which he lives. He instead stays behind and looks after the place. The slaves of the plantation make fun of him and at one point, the house servant will not even let him in the house because of his social standing. Wash believes Sutpen, the master of the house thinks more highly of him. He does not learn until he hears the way Sutpen refers to Wash's granddaughter how low Sutpen's opinion of Wash and his family actually is. In retaliation, Wash kills Sutpen, whom he believed would take care of the mother of his baby. He then kills his granddaughter and the baby and allows himself to be killed, knowing that his family will be viewed as the ones who killed the southern war hero and not treated well.

Virginia Du Preappears in There Was a Queen

Also known as Aunt Jenny, Virginia Du Pre lived in Carolina during the Civil War. When Yankees attacked her hometown, she saw her home burned and her parents killed. It was at this point she left Carolina to refugee to her brother's plantation in Mississippi. As an old woman she still lives there with her great niece by marriage and a few remaining Negro servants. Aunt Jenny is portrayed as being a person of character. Her personality is contrasted with her niece who is described as trash.

More summaries and resources for teaching or studying Collected Stories of William Faulkner.