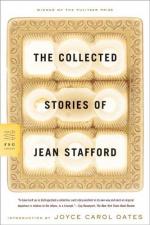 Jean Stafford
This Study Guide consists of approximately 56 pages of chapter summaries, quotes, character analysis, themes, and more - everything you need to sharpen your knowledge of The Collected Stories of Jean Stafford.

This detailed literature summary also contains Topics for Discussion and a Free Quiz on The Collected Stories of Jean Stafford by Jean Stafford.

The Collected Stories of Jean Stafford by Jean Stafford was published in 1969. Comprised of thirty short stories, separated into four distinct sections, and covering a varied number of subjects, each story is unique and each is prized for its contribution to literature. This collection was the winner of the 1970 Pulitzer Prize for Fiction.

The first section is titled The Innocents Abroad. It is made up of six stories, each wonderfully detailed in their depiction of naivety, innocence lost, and the distinctions of class. There is the story of young Maggie Meriwether in Maggie Meriwether's Rich Experience. Maggie is a young woman who has traveled abroad and will experience the hubris of the English upper crust on vacation in the French countryside. The Children's Game and A Modest Proposal are stories of divorcees forced into a social confinement - an exile - from their peers for a period of time that would be deemed acceptable for them to return to polite society.

Sue Ledbetter is the young girl who befriends Ramona Dunn in The Echo and the Nemesis. Both girls are college students at Heidelberg University and Ramona, as Sue discovers, suffers a mental illness and exhibits multiple personalities. The Maiden is a darkly disturbing tale that defines polite conversation between two previously warring peoples. At a dinner party hosted by the English, a German couple finds humor in relating the tale of how they met while observing the death of a man by Le Guillotine. Caveat Emptor is the tale of a young couple who discover and almost lose each other for the entertainment of the bored and presumptuous faculty of Alma Hettrick, a finishing school for young women and the mothers of tomorrow.

Jean Stafford further exemplifies the distinctions between classes, snobbery at its finest, and the impoverishment of young women in the section titled The Bostonians, and Other Manifestations of the American Scene. Life Is No Abyss is the story of Cousin Lily and her visit, by proxy, to an ailing Cousin, Isobel Carpenter. Miss Rhoda Bellamy is a contrary woman, in her eighties, who remembers her past and the opportunities wasted in The Hope Chest. Mrs. Margaret Heath caves into social pressure when she visits Mrs. Wainright-Lowe for tea and Polite Conversation. In A Country Love Story, May, Daniel's wife, is distraught when the winter months' confinement increases the symptoms of her husband's illness. May imagines a lover in the absence of her husband's attention. May's imaginary lover saves her sanity and, in the end, is her bane, when she discovers there is no salvation to be had.

A young Mexican woman from the West, Rose Fabrizio, rails fate for her father who is a low person without the means to provide for her in the manner of the upright gentlefolk for whom she worked. In The Bleeding Heart, Rose learns that all gentlefolk are not what they are imagined - nor are their lives. The Lippia Lawn is the rather confusing tale of a young woman who spends time with a horticulturist and some plants. The woman reminisces and the flowers, shrubs, or trees that affect the thought, color every memory. A disturbing tale follows this horticulturist endeavor when Pansy Vanneman is introduced in The Interior Castle. The Interior Castle reminds again of the autobiographical nature of these short stories by Jean Stafford. Pansy Vanneman, like Jean Stafford, is severely injured in an automobile accident and is hospitalized, awaiting facial reconstructive surgery.

In Cowboys and Indians, and Magic Mountains, Jean Stafford introduces orphaned children, impoverished families, societal expectations placed on women and children alike, and the spiritual affects on a society ruled by class distinctions. This section suggestions that New England, specifically Boston and New York, is the last outpost of civilization. In The Healthiest Girl in Town, an eight-year-old girl, Jessie, is moved to a Western town by her recently widowed mother. Jessie's mother has retained work, applying her nursing skills to a town of invalids.

The Tea Time of Stouthearted Ladies speaks directly of the families who have been socially rejected by Bostonian society when members of their families take ill. Judy Grayson is a woman in the thrall of young love to her new fiancy and the beauty of a mountain day in A Mountain Day. The day is marred by tragedy when two young maids are discovered drowned. Another young woman, Ella, is afraid of the dark in The Darkening Moon. Bad Characters is the introduction of Emily Vanderpool. Emily is an eleven-year-old girl living in Adams, Colorado, whose mouth and association with a young delinquent, creates the social faux pas inherent to the very young and the very old.

In the Zoo, the sixth story in Cowboys and Indians, and Magic Mountains, is one of Jean Stafford's most popular and renowned stories. In the Zoo creates similes among the zoo's inhabitants and the people who inhabit the memories of two women. Polly Bay escapes societal pressures and familial expectations in The Liberation. A Reading Problem is another story of young Emily Vanderpool. Emily is struggling to find a quiet reading place, and every attempt and each location is an experience in itself. A Summer Day is the lone tale of an orphaned boy. The child is Indian, possibly Cherokee, and arrives on a hot, summer day at a reservation school. A young man commits suicide and only a fellow female college student ponders, with any depth, the philosophy behind it in The Philosophy Lesson.

Manhattan Island is a compilation of seven stories whose characters seek acceptance in the glittering whirl of New York City. Children Are Bored on Sunday is the story of young woman in the city who is rejected from the intellectual class. Free as a child without a care, she finds herself at the Metropolitan Museum on a Sunday afternoon. A young woman, and darling of society, loses her hearing on the eve of her wedding day in Beatrice Trueblood's Story. Between the Porch and the Altar is where a woman does penance at the beginning of Lent. A woman of forty-three, who has never been married, narrates the tale, I Love Someone. After the death of a friend, the woman considers her life.

The final two stories in this section based on Manhattan Island are centered on beauty and its acknowledgement in a society with high expectations. Cops and Robbers is the tale of a young girl's loss of her beautiful tresses to a father's petty injustice to his wife. As the youngest of five children, the youth's hair, so like her mother's, was the child's perceived single contribution to her family. A beautiful woman is kept so by the contributions of medical science in the story The End of a Career. When her story ends, so does her life. The woman's beauty has faded and so had her purpose for living.

More summaries and resources for teaching or studying The Collected Stories of Jean Stafford.