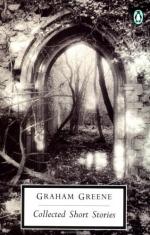 The stories that are written in first person narrative are usually the thoughts of a man who is a reporter or a writer. Sometimes the reader learns his name, and sometimes not. The exception to the male first person narrator in Cheap in August, when the narrator speaking in first person is a woman named Mary Stewart. There is one other story in the collection where the main character is told by a woman, An Appointment With the General, which is told in third person subjective.

Many of the stories are told in first person narrative, yet relate...