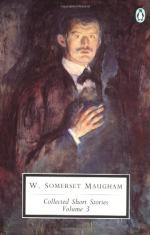 "They were hard and cruel eyes, and very wary; and they gave him a cunning shifty look. Here was a man that you could neither like nor trust at first sight." ("Miss King" p. 10)

"It was as unsatisfactory as those modern novels that give you a number of unrelated episodes and expect you by piecing them together to construct in your mind a connected narrative." ("Miss King" p. 13)

"Now it was Ashenden's principle (a good one in life as well as in the Intelligence Department) always to tell as much of the truth as he conveniently could;..." ("Miss King" p. 17)

"It might be that some new plan was in question, it might be that the very greatest affairs were at foot, and perhaps what the old woman had to say might make all the difference in the world." ("Miss King" p. 42)

"I don't believe the Hairless Mexican has...