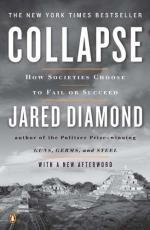 Related Topics
Guns, Germs, and Steel: The Fates of Human Societies
Jared Diamond
The Third Chimpanzee: the Evolution and Future of the Human Animal
Upheaval: Turning Points For Nations in Crisis

Jared Diamond
This Study Guide consists of approximately 62 pages of chapter summaries, quotes, character analysis, themes, and more - everything you need to sharpen your knowledge of Collapse.

In Collapse – How Societies Choose to Fail or Succeed by Jared Diamond examines societies of the past and how they addressed the great challenges they were faced with in surviving severe and long-term damage to the environment, damage that was usually out of negligence or ignorance, brought on by the societies themselves. Diamond begins his work with a look at Montana.

Why Montana? Montana is a geographically large state with a small population. Diamond purposely offers the story of Montana to wake the readers up on two facts that cannot be ignored. First, Montana is suffering from the same environmental woes as did the failing societies of antiquity. Secondly, Diamond uses Montana as an example of a state in a first world nation because it is small and has a low population. Extrapolating Montana’s issues to large urban areas like Los Angeles, New York City or London the unstated comparison is obvious. If Montana is experiencing such dire threats to its societies, how could these huge advanced population centers be faring?

Diamond then tells the story of societies of old and how many failed although some, facing the some conditions and environmental concerns, were able to succeed. It’s about choices made and anticipating problems, recognizing them, finding solutions and fixing the problem. This is a recipe for success in the face of disaster, a recipe that most of the accounts Diamond shares in his book chose to ignore.

There is a mystique about Easter Island. Why did the islanders carve hundreds of huge stone statues, and beyond that how did they move the statues some of which weighed nearly one-hundred tons? They had to be bright and resourceful to accomplish feats that seem impossible, but why did their society advance and why did they vanish? Like other failed cultures, they depleted their woodlands, ruined their soil and water and were unable to meet the food demands of a growing population. The fate of two other Polynesian Islands – Pitcairn and Henderson – also failed for apparently similar problems.

Diamond also describes the downfall of the Anasazi society and the collapses of the Maya culture that was advanced in many ways. He tells of the failure of the Norse Vikings on Greenland and Vinland while the Inuit succeeded there. The Iceland Norse, who were determined to adapt to their new surroundings, were able to pull themselves out of a dark hole before they vanished like their brother Greenland settlers who clung to their European roots.

Modern societies have failed or are failing as well. Rwanda experienced one of the most devastating events of current times in the genocide in which the Hutu wiped out the Tutsi. Haiti and the Dominican Republic share the island of Hispaniola. However, the Dominican Republic has made better choices about its environment and is faring much better than Haiti, one of the poorest countries in the world and one that has little hope for recovery. Environmental abuse is not limited to third world countries. Australia is struggling with a low water supply, land degradation and the tyranny of distance. China is abusing the world’s environment with the pollution it spews into the air and waters that travel around the world.

Diamond ends Collapse with warnings about the future that were proven deadly in the past. He offers solutions that can turn crises around when big business, governments and the public at large agree to be dedicated to the protection and preservation of the Earth and its valuable resources.

More summaries and resources for teaching or studying Collapse.