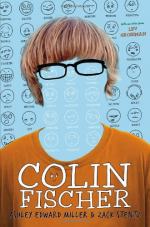 Ashley Miller (screenwriter)
This Study Guide consists of approximately 42 pages of chapter summaries, quotes, character analysis, themes, and more - everything you need to sharpen your knowledge of Colin Fischer.

On the first day of high school, Colin Fischer, a teenager suffering from Asperger's Syndrome, finds his head being dunked in the toilet by school bully Wayne Connelly. Colin, who carries a Notebook around to write down all his thoughts and observations, is generally ostracized by his classmates, except for a girl named Melissa Greer, whom he has had a tentative friendship with throughout grade school because of their mutual position as social pariahs. Though Melissa has blossomed into an attractive young woman garnering the attention of the "popular" boys, she is still determined to maintain her relationship with Colin. Colin's gym teacher, Mr. Turrentine, also refuses to treat Colin like he is different in a negative way, and teaches him to play basketball against all odds of Colin's deficiencies.

Colin spends his time observing the social groupings of his classmates: athletes like Eddie, Stan, and Cooper act superior. Eddie is dating Sandy Ryan, who, like Melissa, has matured physically over the summer, but she is also still the victim of Wayne's bullying. Colin distrusts Rudy Moore, a clever but dangerous student whose facial expressions remain elusive to the ever-observant Colin. At lunch on the first day, Melissa's friends bring a cake to celebrate her birthday, and Colin watches the different ways his fellow students eat. The situation devolves when some jocks attack Wayne for his earlier aggression. Suddenly a gun goes off, sending everyone into chaos, except Colin, who moves in for a closer look: he notices the gun covered in birthday cake, various school supplies, and a tube of melon-colored lipstick at the "scene of the crime."

Colin realizes Wayne has been blamed for the gun when Wayne does not show up in school the next day. But Colin realizes Wayne could not be the gun's owner based on the way he was neatly eating his cake. In emulation of his logical hero Sherlock Holmes, Colin sets out to determine who really had the gun in the cafeteria. When questioned by the police, Colin realizes they suspect gang involvement. For the first time, Colin lies to his parents so he can go visit Wayne after school. Wayne is suspicious of Colin's motivations after the way he has treated Colin, but Colin is simply driven by curiosity to discover the truth. Wayne takes Colin to see members of an LA gang called La Familia to investigate the gang connection. When they inquire about how to get a gun, head gangster El Cocodrilo lets slip that Eddie and Stan previously visited him for the same purpose.

After narrowly escaping the gangsters (who have realized they are bluffing), Colin and Wayne (who is beginning to understand the negative impact he has had on Colin's life) are picked up by Colin's father, Mr. Fischer. Colin's parents worry about his new "friend" and his abruptly rebellious behavior. His younger brother Danny simply can't stand that Colin gets away with actions that he himself would get punished for. He destroys Colin's room, sending Colin into a frenzy. At school the next day, Colin confronts Eddie about the gun. Eddie confirms Colin's suspicions that he bought it, but he discovers Eddie was not actually in the cafeteria at the time of the crime. Colin reviews all the facts and comes up with a new solution: he takes it upon himself to invite Wayne to school to speak with the principal, Dr. Doran, also forging a note to get Sandy Ryan to the principal's office. Colin realizes Sandy removed the gun from Eddie's locker to keep him safe, and had it in her purse that day in the cafeteria: thus the icing smears. Sandy finally confesses, but Colin has no way of proving the gun actually belonged to Eddie.

The next day at school, Sandy is expelled and Melissa is upset that there isn't more justice for the true gun owner, though Colin is fairly dispassionate about the issue of justice. Eddie and Stan are ready to take revenge on Colin (Stan is still infuriated that a provoked Colin attacked him on the basketball court earlier in the novel) but Wayne arrives on the scene, newly reinstated in school, and stands up for Colin. While serving detention after school, Colin discovers Rudy Moore was involved in the gun incident, sending Eddie to buy it from El Cocodrilo. Wayne threatens Rudy for causing trouble just for the sake of feeling powerful. Both Colin and Wayne know trouble has barely begun with Rudy, but they relish the joy of their newfound friendship.

More summaries and resources for teaching or studying Colin Fischer.

Colin Fischer from Gale. ©2005-2006 Thomson Gale, a part of the Thomson Corporation. All rights reserved.