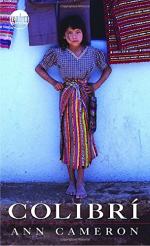 "Colibrí" is set in Puerto Rico in the city of Jayuya. The city's name is derived from local Indian Chief Hayuya. Jayuya is tucked into the northern border of Toro Negro Forest Reserve and commands breathtaking views extending to the Atlantic and the Caribbean. Sometimes natives refer to it as "La Capital Indigena," to signify its large population of Taino.

Espada first compares the scattering of the lizards to the way that "green canoes" scattered "before the invader." This is a historical allusion to the 1493 Spanish invasion of the island, which natives called Borinquen.

"Iron and words" refer to guns and language, two of the primary tools the conquerors used to subjugate people. The Spanish named the native Arawak Indians Taino. When Espada writes that the Taino "took life / from the plátanos in the trees," he is describing how this banana-like fruit sustained...