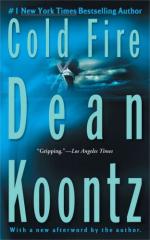 Dean Koontz
This Study Guide consists of approximately 51 pages of chapter summaries, quotes, character analysis, themes, and more - everything you need to sharpen your knowledge of Cold Fire.

This detailed literature summary also contains Topics for Discussion and a Free Quiz on Cold Fire by Dean Koontz.

Cold Fire by Dean Koontz is a novel that like many of this author's creations is full of twists, turns, and surprises. Jim Ironheart is a modern day Superman. He receives 'messages' to provide life lines to people who are about to die under circumstances that are not natural. He obeys each instruction blindly, putting himself in harm's way to stop untimely death wherever he is sent. Often he has no knowledge of actual events or circumstances, with details simply forming in his mind as he goes along, most of it at the last minute. Still, he manages to arrive in time and carry out whatever action necessary to save the innocent life or lives in jeopardy.

Holly Thorne is a journalist who longs for a life with more meaning. She tries to combine professionalism and honor in a career where both can be a detriment. When she happens to witness a rescue Jim performs, she seeks to interview him, but Jim is media-phobic and puts a high price on privacy. She still is persistent and he sees something in her that appeals to him. He is tired of his lonely existence, but reluctant to involve anyone in a life that is anything but ordinary. Holly persists, using her vacation time to pursue him, but instead of securing the interview she sought, she finds herself following him to learn his secrets firsthand. What she discovers is not at all what she expected. Holly is faced with her own mortality and discovers that she needs more meaning in her life and she finds that the closer she gets to Jim, the more intense her life becomes. When she reveals that she is dreaming about the windmill believing it has some connection to him, he relents and she finds the life that she has always yearned for. It will not be easy though. Jim has secrets and to make a life together work, she has to help him to remember his past before it manages to consume them both. In a journey of discovery, she takes Jim back to where everything began, which is the windmill. From there she will help him to rediscover himself, but to do so, he must give up the notion that it is all out of his control. The trauma of his childhood still persists and to move forward, he must go back and face the many truths that have been buried for years. His parents' death, and the death of his grandmother are only the beginning. He must trust Holly and let go of the stories and the entities his mind has created in order to heal and to get back his life. In return, she wins his heart and companionship in what will be a worthy and profoundly deep and meaningful life.

More summaries and resources for teaching or studying Cold Fire.