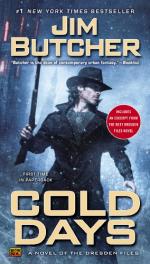 Cold Days: A Novel of the Dresden Files Characters

Harry Dresden is a professional wizard and private investigator in Chicago, Illinois, USA, the main character and narrator of the Dresden Files Series. He is described as tall, thin and scarred. He is somewhat socially awkward, and adheres strongly to his own moral code. He tends to keep secrets from his friends and family, claiming it is for their safety.

He is now the Winter Knight, the prized servant of the Faerie Winter Queen Mab, who has nurtured him back to health after he is nearly killed.

Because of this role as Winter Knight, his usual wizardly knowledge and powers are now augmented with the power of Winter, which gives him great strength, the ability to not feel physical pain, and to blast people with overpowering cold and ice. The trade-off is that the mantle of the Winter Knight will consume him eventually, overcoming his...

Cold Days: A Novel of the Dresden Files from BookRags. (c)2022 BookRags, Inc. All rights reserved.