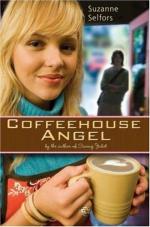 Suzanne Selfors
This Study Guide consists of approximately 24 pages of chapter summaries, quotes, character analysis, themes, and more - everything you need to sharpen your knowledge of Coffeehouse Angel.

In Chapter 16, in World Mythology, Katrina reads a story that is a thinly veiled accusation against Vincent for not helping save her family business. Vincent becomes angry and tells her to get a life. Then, at lunch, Katrina learns that Elizabeth asked Face to go to the festival, but he told her he could not answer her at this time. Elizabeth is horrified. Then Malcolm shows up and tells Katrina he needs to show her something.

In Chapter 17, Malcolm takes Katrina and Elizabeth to Anna's where they find a crowd outside the store. It turns out Ratcatcher has caught an extremely large wharf rat. Officer Larsen tells Anna that he has to inform the health department of the rat in her coffeehouse and warns her not to move the rat until the health department comes.

More summaries and resources for teaching or studying Coffeehouse Angel.