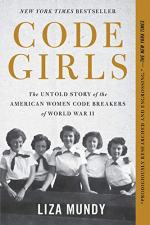 The following version of this book was used to create this study guide: Mundy, Lisa. Code Girls. Hatchett Books, 2017.

Code Girls brings to light the enormous contribution of women in the field of cryptanalysis throughout the early twentieth century. Due to the clandestine nature of code work during times of international strife and conflict, much of the accomplishments of women during wartime has gone unrecognized. Whether due to sexism or the dire need for secrecy, the brilliant feats of female code breakers have gone unrecognized. Yet Mundy tenaciously tracks down the few survivors that remain, and discloses the cloistered organization, largely made up of women, who worked tirelessly to crack the codes of foreign enemies in a valiant attempt to save the lives of countless military personnel and put an end to the death and destruction war begets on all of humanity.

Mundy provides a rich history of cryptanalysis and code breaking alongside the narrative of one surviving code breaker, Dorothy "Dot" Braden Bruce. She begins the work by introducing the "secret letters" that were sent out to the elite, prestigious women's higher education institutions in an effort to recruit intelligent, educated young women in the war efforts following the bombing of Pearl Harbor. The war created a dearth of manpower, and thus the government was essentially left with no choice but to recruit the "lesser sex" for positions in the nation's capital. Mundy notes the irony that only 4% of women went on to higher education at this time, so finding the appropriate recruits became particularly difficult initially. To add to the challenge, military branches were highly partisan, so the Navy declared the Seven Sisters schools-those that were founded to educate the best and the brightest women-as their recruiting ground. The Army relented to the Navy's insistence and began recruiting from the next best pool: school teachers. Regardless of their origin, women were suddenly in demand in the workforce and beckoned to the nation's capital to support wartime causes.

After setting the groundwork for how women came to become code-breakers, Mundy flashes back to the early 1900s, during a time when cryptanalysis "was a parlor game" (65). Two key female figures emerge: Elizebeth Smith Friedman and Agnes Meyer Driscoll. These bright young women set the stage upon which the many vital female code-breakers find themselves in the 1940s. Both women are key in creating techniques and methodology that will be used to break codes and ciphers that will eventually bring an end to World War II.

In Part I of the work, "In the Event of Total War Women Will Be Needed," Mundy delineates the historical context of cryptanalysis and the role of women. The onset of the war begins to disintegrate the traditional gender roles out of sheer necessity. Men were rapidly enlisting to fight in an international conflict that seemed to being playing out on both sides of the nation, and women became the sole resource for certain roles that desperately needed to be filled. Anxious to do their part, women can flooding into Washington, D.C. in droves. Part I discloses the dire need for the U.S. to get up to speed on cryptology in an effort to gain control in the Pacific, underscoring how critical it is to warfare to break communications of opposing forces. This opening section also emphasizes how eager women were to do their part to protect their brothers, husbands, friends, and neighbors, as well as how satisfying it was to feel involved in the war efforts. Women welcomed the opportunity to be vital and productive.

Part II, "Over All This Vast Expanse of Waters Japan Was Supreme" reiterates how powerful the Japanese fleets were and how critical it was to break the Japanese codes and ciphers. Throughout the work, Mundy continually highlights how covert all code-breaking endeavors were and the toll it took on the staff knowing that soldiers' lives depended upon their success. The pressure on these organizations was enormous yet none of the personnel involved in code-breaking could disclose a word to anyone, not even a family member. Often times best friends, who not only shared a room together, but perhaps a bed, given the overcrowded circumstances of the nation's capital in this crisis, could not speak of their work. Laced throughout the work, Mundy references the rivalry between the Army and the Navy, as well as the history of the WACs, Women's Army Corps, and the WAVES, Women Accepted for Voluntary Emergency Service. Additionally, Mundy highlights the atmosphere of wartime: a camaraderie born of desperation. Everyone wants to contribute to the safe return of all personnel abroad, and the code breakers do their part relentlessly and tirelessly and as Mundy puts it "Pencil-Pushing Mamas Sink the Shipping of Japan" (242). Yet this sinking is not the end.

Part III, entitled "The Tide Turns" examines the creation of the code-breaking mechanism necessary to defeat the Germans. This section discloses the mammoth undertaking of breaking down the cryptologic capacity of Germany's Enigma. With development efforts set up at the "Sugar Camp" in Ohio, the Navy WAVES and inventor Joseph Desch are tasked with the formidable job of creating a series of machines that can crack the German Enigma cipher, set up to produce numerous encryptions for Naval Intelligence. The endeavor proves successful and plans for the invasion of Normandy soon follow. Mundy recounts D-Day, but reminds that "in many ways the waning days of the war were the bloodiest and worst" (311). She goes on to describe the aftermath for both servicemen, and those working in the various coding departments in the Capital. Mundy ends this tribute to all of those women who never truly received credit for their amazing and life-saving accomplishments with a recounting of their contributions to numerous fields and advancements. She aptly closes with anecdotes of the surviving "code girls," most memorably Dot Braden Bruce, and her humble recounting of the poignant times spent with all of the girls at Arlington.