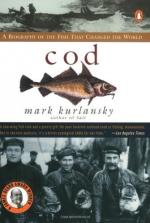 Cod: A Biography of the Fish That Changed the World Summary & Study Guide

Cod: A Biography of the Fish That Changed the World Summary & Study Guide Description

Cod: A Biography of the Fish That Changed the World Summary & Study Guide includes comprehensive information and analysis to help you understand the book. This study guide contains the following sections:

This detailed literature summary also contains Topics for Discussion and a Free Quiz on Cod: A Biography of the Fish That Changed the World by Mark Kurlansky.

Gadus morhua, or cod, has been an important commercial fish for about six hundred years. As early as 1620, cod fishing was as the center of international conflict as various nations attempted to monopolize rich fishing grounds. Cod's prolific reproductive rates were seen for hundreds of years as a guarantee that the species would never be negatively impacted by human activity. However, numerous technological improvements and widespread increase in the scale of fishing operations have systematically reduced the various global cod fisheries to commercial insignificance. Today, cod is a depleted fishery and rapidly is becoming increasingly scarce.

The book presents an assortment of information related to cod, the primary topic. Cod biology and natural history is presented in fairly limited terms and even that with a focus on cod's commercial significance. In this respect, the book is more of a biography of cod-human interaction than cod itself. For the purposes of most of the book, cod refers to G. morhua only—the Atlantic cod—but at times the species line is blurred, and cod is considered to be a large-scale commercial product that, at various times and places, has included additional closely-related species. Since much of the book considers the history and causes of population decline the non-specific use of the term cod can be at times confusing.

Part I of the book is largely concerned with the presentation of cod from a biological point of view—what the fish is, how it lives, how it spawns, what it eats, and so forth. Part I also explains the initial use of cod as a food for humans and examines the early widespread commercialization of cod fishing. Of course, cod was and is not the only important fish species, but the book does not delve into related fisheries markets in any great detail. Part I ends with a presentation of several hostilities between nations erupting over access to, or control of, cod fishing grounds.

Part II of the book is largely concerned with cod reproduction rates and fishing techniques. Cod are prolific and, for many years, were considered impervious to population decline due to human activities. As late as the 1860s, scientists, including Thomas Henry Huxley, were arguing that cod reproduction was sufficiently robust to guarantee extensive cod fisheries for any number of years. Huxley was wrong, though, and did not foresee the extensive improvements in fishing techniques and equipment that within a few decades would render many of the world's richest cod fisheries devoid of cod.

Part III of the book is largely concerned with the more-recent developments of cod fishing, ending c. 1998. During the period discussed, various international treaties extended national exclusionary zones to 200 miles and excluded international fishing within these waters. The same period saw vast increases in fishing fleets, vast improvements in fishing techniques, and equally vast decreases in cod catches. By the time of the book's publication cod has become an elusive and declining species, no longer of supreme commercial significance in many major fishery management areas.

Cod: A Biography of the Fish That Changed the World from BookRags. (c)2022 BookRags, Inc. All rights reserved.